Fantasy, in Theory: This Is Not Amari Cooper

A representation of a thing is not the thing it represents.

This Is Not an Introduction

During World War I, several artists coped with a world that had seemingly rejected logic and reason by creating art that embraced nonsense and irrationality. Dada, as this movement was called, strove to strip words and images of meanings. An installation titled Fountain is really a porcelain urinal. A poem titled Karawane, (caravan), is really just a sequence of nonsense sounds.

As the world returned to sanity following the Great War, Dada gave rise to Surrealism, which preserved the nonsense but turned it into the nonsense of dreams and then made an effort to reconcile it with the reality of our waking lives. Think: Salvador Dalí's La persistència de la memòria, (The Persistence of Memory), also known as “that painting with the melting clocks”.

One of the great surrealist painters was Belgian René Magritte. You're probably familiar with several of his works, such as Golconda, (also known as “a bunch of guys standing around in midair”), and The Son of Man (also known as “that picture from The Thomas Crown Affair”). 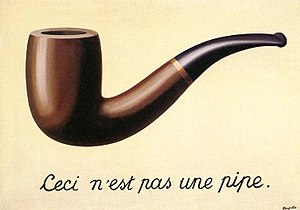 My favorite of Magritte's works, though, is The Treachery of Images. It is a very simple picture, just a realistic drawing of a pipe with “this is not a pipe” written beneath in French. Like a lot of Dadaist and Surrealist art, it left many people confused and angry. Of course it was a pipe! Just look at it!

Responding to the furor later, Magritte said “The famous pipe. How people reproached me for it! And yet, could you stuff my pipe? No, it's just a representation, is it not? So if I had written on my picture 'This is a pipe', I'd have been lying!”

Oftentimes the beauty of art is that it is beautiful. But also, the beauty of art lies in its power to reveal what is hidden, to convey great truths, (some of which lie below the level of language or conscious thought itself). The painting was not a pipe, it was a painting, and yet it took the artist spelling it out underneath for us to see it.

Around the same time that Magritte was active, a Polish-American scientist and philosopher named Alfred Korzybski was arguing that no one had direct access to reality since all of our knowledge was limited by our bodies and our languages. We could only know what we saw and we could not see everything. We thought in words and were therefore bound by the meanings of those words.

As an example, Korzybski once stopped in the middle of a lecture, declared himself famished, and pulled a pack of biscuits wrapped in white paper from his bag. He ate one, then gave a few to the students in the front row, and then ate another.

While the students were chewing, he tore the white paper off of the pack to reveal that they were, in fact, eating dog biscuits. Several students immediately felt ill and had to run from the lecture hall, at which Korzybski triumphantly declared: “You see, I have just demonstrated that people don't just eat food, but also words, and that the taste of the former is often outdone by the taste of the latter.”

(Lewis Carroll illustrated this point decades earlier in Sylvia and Bruno Concluded, writing about a map that used a scale of one mile equals one mile, which allowed for plenty of detail but presented some practical difficulties, prompting a character to conclude “we now use the country itself, as its own map, and I assure you it does nearly as well.”)

This Is Not The Body

The map is not the territory. The photo at the top of this piece is not Amari Cooper. It will never catch or drop a football; indeed, if you threw one at it you'd probably just break your screen. The representation of a thing is not the thing being represented.

It's not just images and maps which prove treacherous. Amari Cooper is one of eleven players with at least 1800 receiving yards through their age-22 season, but that list of players is not Amari Cooper. (Well, one of the players on that list is Amari Cooper, but using Cooper as a point of comparison for himself is like creating a map with a scale of one mile equals one mile— you might as well just use the country itself.)

Since 1992, (as far back as we have target data), Amari Cooper had the 9th-fewest receiving yards by any player with 35 or more targets through six games. We could compare how those players did in games 7-16, (spoilers: regression), but history is not destiny and Cooper is not fated to follow in their footsteps. That list is not Amari Cooper. (Nor is it Le'Veon Bell, whose poor receiving stats haven't received nearly the same amount of attention.)

Cooper is just the seventh receiver drafted in the first sixteen picks to make the pro bowl in each of his first two seasons, a list comprised entirely of Amari Cooper and six other players who are not Amari Cooper.

On Thursday, Amari Cooper became the 31st player with a 200-yard receiving game at age 23 or younger, joining a long list of receivers who are not Amari Cooper. If he manages a second such game this year, he'll join a much shorter list of four names, none of which are Amari Cooper.

I may seem like an odd messenger to be delivering this particular message, given my professed love for using historical comparisons to estimate the range of potential player outcomes. But I think I'm the perfect person to deliver it. The more someone loves looking at historical comparisons, the more vital it is to remember that comparable players are not the player to whom they are comparable.

Last year, Jared Goff was a highly-drafted rookie who had one of the worst seasons in NFL history. It was easy to look at the list of highly-drafted rookies with terrible rookie seasons and draw conclusions. Maybe it wasn't promising for Goff, littered as it was with some of the biggest busts in history. Maybe it was promising since he was joined on that list by McNabb, Aikman, and Bradshaw.

But the truth is the names that query produced have no impact on Jared Goff's career. Donovan McNabb could have turned into a terrible quarterback, or Ryan Leaf into a perennial All-Pro, and Goff would be no more likely to succeed or fail today because he is, in fact, a different person. The only name on the list of terrible rookie quarterbacks that has any bearing on the direction of Jared Goff's career... is Jared Goff.

This Is Not The POint

Player comparisons can be a very powerful tool to have in our belt. I'd argue that they are, in fact, one of the best and most powerful tools we have at our disposal when it comes time to predict the course a player's career will take.

This tradeoff is acceptable, even necessary. A map with a scale of one mile equals one mile is too cumbersome and unwieldy for daily use, (and imagine the trouble of trying to fold it and put it away once you were done). To paraphrase Korzybski: players similar to Amari Cooper in some respect are not Amari Cooper.

But, if correct, they have a similar structure to Amari Cooper, which accounts for their usefulness.

How to Value Suspended Players in Fantasy Football