A guide to navigating the Dynasty IDP format.

A Footballguys Premium Subscription will give you the edge with lineup and waiver wire advice tailored to your league.

Save Time, Win More with Footballguys.

Understanding player scarcity is key in dynasty IDP formats because:

COMPARING SCARCITY WITHIN THE SAME POSITION

Example: In a standard IDP, 12-team league in which you are required to start 3 LBs, and each team typically can bench an additional LB with the roster limits, you would use the following simple equation to figure out how many LBs you need to compare:

According to John Norton’s latest dynasty IDP rankings, LB1 is Luke Kuechly and LB48 is Von Miller. Using his projections for this year, you would find that John projects Kuechly to score 246.25 points to Miller’s 150.25 points. Simple subtraction shows a 96-point difference between the two for the year. Averaging each of their scores by dividing by 16 games, Kuechly is projected to score 15.4 points a game while Miller is projected to score 9.4 points per game, a difference of 6 points a game.

Considering dynasty startup ADP also gives you additional insight. Kuechly is being drafted in the late seventh round while Miller is going in the sixteenth round or undrafted.

While the difference per game is certainly apparent, the drop-off is not as bad as you might have anticipated, especially when you can get a player like Miller off the waiver wire. As you will see momentarily, the drop-off is more steep at the skill positions.

Where things really get muddled for most people is comparing scarcity among multiple positions. Take a look at some data that may help make this a little less murky. The table below considers five years in a PPR league with the following settings: 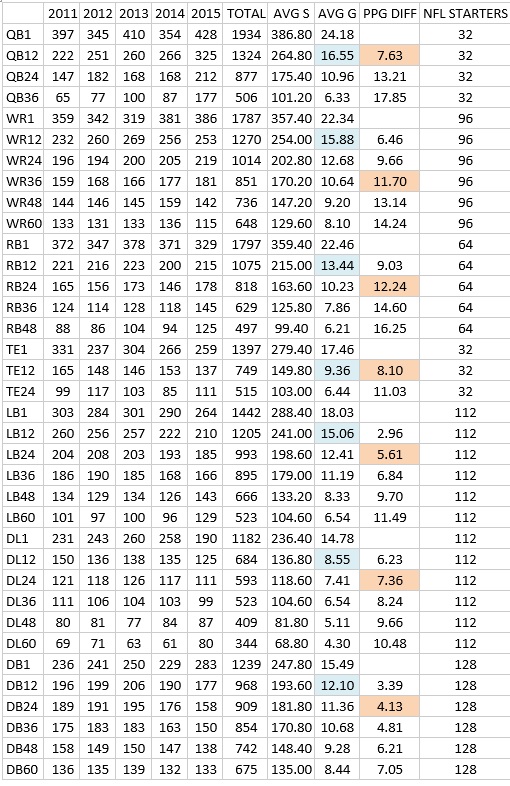 The table illustrates that the five-year historical difference in points per game (PPG) drop-off at each of the defensive categories is considerably less than the drop-off in value on the offensive side of the ball. Please note that this is based on just one particular scoring system. Changing any of the scoring settings will affect player scarcity, or at the very least, put a premium on the very elite at each position.

While this table alone is not enough to tell the story of all the factors that go into scarcity, you can make a few powerful observations and generalizations based on the data:

Here are a few abbreviated examples that may help with application:

Example A: If the scoring system is big play-heavy and you are required to start 3 LBs, 3 DLs, and 3 DBs, greater value is placed on DE and LB. There are fewer consistently elite players in each category and these are the two positions that statistically generate more big-play points.

Example B: In an IDP scoring system that rewards 1.5 pts per tackle, .75 pts for assists, and 2 points for sacks, JJ Watt averaged 11.9 fantasy points per game. The number two DE Muhammad Wilkerson averaged 9.9 fantasy points per game in 2015. Because of name value, Watt was usually selected very early in startup drafts compared to picking up Wilkerson 10 rounds or more later.

For two additional articles that hit on player evaluation and scarcity concepts, check out this excellent piece by Eric Coleman and this wonderful piece by Steve Gallo.

Section II Takeaway: Understanding player scarcity is just another way to give yourself an advantage when drafting and making waiver decisions in dynasty formats. You can afford to wait and take your LBs, DLs, DBs, and even QBs later and instead stock up on RBs and WRs.

What You Need to Know From Week 12

Waivers of the Future: Week 13

The Footballguys Shop is online now!