Things I discovered today: According to the Associated Press, there are some words I've been mispronouncing.

Travis Kelce weighed in and blamed it on his dad's laziness.

But he's cool with both pronunciations.

Travis Kelce this morning on his last name. #Chiefs pic.twitter.com/dtAftEHqrn

This is the kind of hard-hitting NFL Content you come to Random Shots for.

I don't know much about the NHL. But if I did a Random Shots for hockey, I'm guessing Trevor Zegras would be a regular.

I've long said the NFL storylines seem almost too good to be true.

A New England vs Tampa Bay Super Bowl would be totally on brand.

If there's anything you can count on, it's things move fast and a lot can change between now and February. But today, it's looking pretty good. Here's the ESPN Power Rankings with the Patriots and Buccaneers in the top three.

Kupp made an excellent play here on what has now become seemingly routine for him.

But these types of plays don't "just happen". Listen to Kupp's explanation of what he saw and how they responded.

Kupp gave an answer like this at the Senior Bowl and I was like, “oh this dude is gonna dominate” pic.twitter.com/k4t1YdAWAC

It takes more than physical talent to excel at this level. Sometimes a lot more.

Jordan Poyer and Micah Hyde were not happy with post-game questions from the press.

Buffalo Bills' safeties Jordan Poyer and Micah Hyde were not happy after a reporter asked if Monday's loss to the New England Patriots was "embarrassing." pic.twitter.com/f3Y33HeXAD

Here's something way more interesting in my opinion.

Buffalo cornerback Tre’Davious White recently suffered a torn ACL and his season is over.

Bills fans have raised over $100,000 for the Food Bank of Northern Louisiana, where White is from, and made a donation in his name.

Look at what you did, #BillsMafia pic.twitter.com/72nUvFywGx

White responded, "I am at a loss for words for what the Bills Mafia has done for me and my hometown. It truly means the world to me to have my fans support me in this way, by giving back to my community.”

Bill Belichick tried to tell us.

He broke out the Navy mask in the pre-game interview then proceeded to run the ball all night. 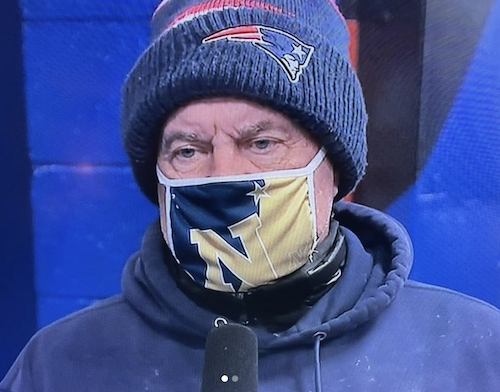 Thanks to Will Brinson for that one.

Bills coach Sean McDermott said this after the game. 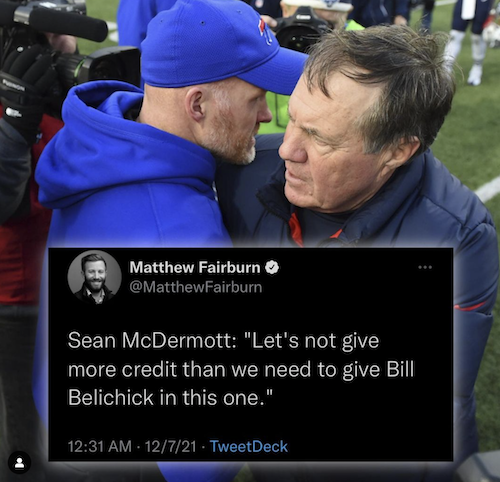 It's a beautiful game.

New LSU coach Brian Kelly was roasted after he spoke to an LSU basketball crowd.

The meltdown from Twitter folks who apparently speak exactly the same way regardless of the audience or social situation was fun to watch.

But bottom line, we all know Chris has it right here.

Music Note this week is from Ben Rector. He's a talented and thoughtful singer-songwriter based in Nashville. I especially like this song as it's a great reminder to be grateful and have perspective.

Thanks to Footballguy Bryan Brady for the recommendation on that one.

CeeDee Lamb. You're kind of ridiculous.

Pitt's Kenny Pickett with how to exploit the rules. This was fun (for Pitt fans) but they've got to change this rule.

You knew there was no way Gardner Minshew was losing to the Jets after this entrance.

Wearing a aviator jacket to destroy the Jets I apprecate his attenton to detail pic.twitter.com/afNDq1yJP2

Minshew after the game with his dad is exactly what you thought it would be.

Gardner and his dad after his first win as a starter since Week 1 of last year is everything you want to see right now. pic.twitter.com/xiPQDwrbNK

Baylor won the Big 12 Championship Sunday upsetting Oklahoma State. Baylor's Jairon McVea made one of the best plays I've ever seen saving a touchdown that would have won the game for OSU.

This ending was WILD ðŸ˜±

In the midst of pandemonium, Baylor coach Dave Aranda was unfazed.

He was asked if he cut loose with his players in the locker room.

Aranda responded, "I did not."

On the other end of the spectrum was Detroit's Dan Campbell.

Dan Campbell's reaction says it all

This struck me too. Notice how embattled quarterback Jared Goff immediately ran to his coach to celebrate after the catch. That says something about their relationship.

Love to see it ðŸ™Œ@JaredGoff16 to @amonra_stbrown for the game-winner!

After the game, Dan Campbell dedicated a game ball to the Oxford community.

Can someone tell Devonta Freeman the "Let's Eat" thing is usually reserved for a run that's more than zero yards?

devonta freeman's reaction after a 0-yard run to end the half ðŸ¤·‍â™‚ï¸ pic.twitter.com/O4bgFnFY6S

Legends know a Legend when they see one. ðŸ¥‡ðŸ¦ pic.twitter.com/eF9HfUh5J9

The wind in Buffalo was ridiculous.

The opening kickoff was the longest kick I’ve ever seen? pic.twitter.com/gtPUIvEfCb

Want to feel old? The kid from the Popeyes Meme grew up to be a high school State Champion.

He went from a classic meme to state champion. Legend ðŸ˜‚ðŸ†

This did not help Mac Jones' numbers... 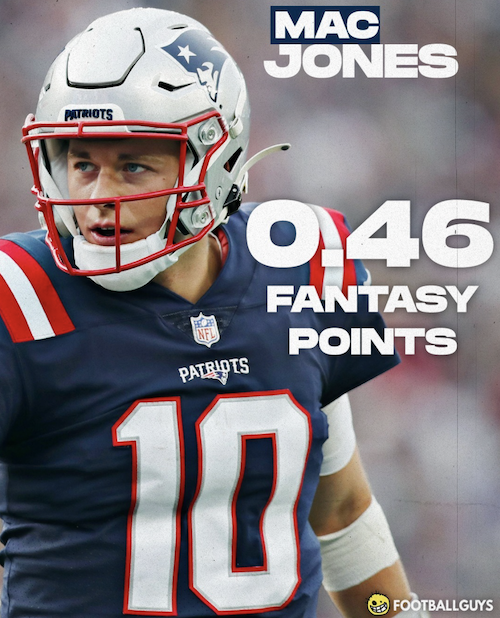 My friend Scott Sexton sent me this column a couple of weeks ago. It's from a blog called The Daily Coach. The title of the article is, "Belichick: 'Get Your Stuff On and Get Out There' "

The point of the article was about mental toughness and how practicing with adversity helps when facing real adversity.

One of the things Bill Belichick often tells his players before practice when weather conditions are tough is "Get your stuff on and get out there."

Running back Brandon Bolden talked about practicing in the cold and rain and wind. Bolden said, "I know whatever it is outside, we’re in it. I’m soaking wet right now. So no, I was not banking on [us being in] the field house at all. It gives us a few more things to work on, a few more things to be conscious of — especially in the weather."

Wide receiver Matthew Slater said after practice, "I think that was certainly one of the windier practices we’ve had in my time here,” Slater said. “It’s great for our specialists, our quarterbacks, our skill players… I’m pretty sure Bill dialed it up; arranged it to be like that. He was grinning ear to ear."

This kind of stuff doesn't get reported about much. But here's Belichick last year.

The NFL combine would’ve been this week.

Render was not invited to the combine.

Part of "The Patriot Way" is Belichick instilling mental toughness in his team by having them practice in these tough conditions.

It's why anyone watching the wind blow the field goals around before Monday night's game knew the Patriots would be ready.

This whole clip from the Patriot's post-game is great. But my favorite was Belichick saying, "This is why we practice in this ####."

Inside the locker room after a big win in Buffalo. pic.twitter.com/akVz1RIm8R

The lesson for me here is don't shy away from adversity. My default can be to seek comfort and convenience. That has its place of course. I'm not advocating we become Spartans. But I do think it's worth recognizing the value of doing hard things. Don't be shy there.