Scott Fish Bowl 12: What To Know

Jeff Bell breaks down all there is to know about Scott Fish Bowl 12.

Scott Fish Bowl! The largest pro-am fantasy football tournament has helped raise hundreds of thousands of dollars for charity and ignited goodwill throughout the fantasy football industry. Scott Fish Bowl 12 will see over three thousand participants through the main tournament and satellite best ball competitions. Most of the draft will start on July 11th, at 10 am est. Time is running short to be involved this year, though you can still sign up for SFB13 next year and monitor Twitter and social media for potential openings in the tournament.

Scott Fish is one of the leading ambassadors of goodwill throughout the fantasy and gaming industry. Fish started the tournament with 96 participants on FFOasis in 2010, a site he started with Footballguy Gary Davenport that introduced Devy and spread IDP concepts to wider audiences. The first tournament was an industry-specific invitational and won by ESPN’s Mike Clay with a dominant season-long performance. That tournament included Footballguy’s Jeff Haseley, one of the few to have participated yearly.

As the tournament has grown, Fish has maintained his personal touch, sending out every invitation himself. But an event of this size needs help, and the tournament utilizes the resources of many volunteers. Ryan McDowell assists in many aspects behind the scenes and organizes a Twitter listing of all participants. The SFB Avi Makers was started by Jake Anderson and Clint Followell and featured work from gifted graphics designers like Stephen Johnson and Bob Gilchrist, creating annual custom Twitter avatars and banners. Sal Leto, Steve Marcuz, and Kevin Cutillo host the SFB Podathon, a 36-hour event that showcases individuals and strategy discussion from across the fantasy industry. The Avi Makers and Podathon are significant parts of the Toys for Tots fundraising effort involving John Bosch and his Fantasy Cares Eliminator tournaments, an annual precursor to the SFB draft in May.

A final extension of the charity fundraising efforts is gear associated with the event. You can find t-shirts from this year’s theme, “SFB LIVE,” featuring several host cities on FF Pod Shirts and Rotowear.

Fish has made the scoring rules available to the public, and your friends at Footballguys have you covered with the Draft Dominator. For a full strategy breakdown, check out Adam Harstad's guide. 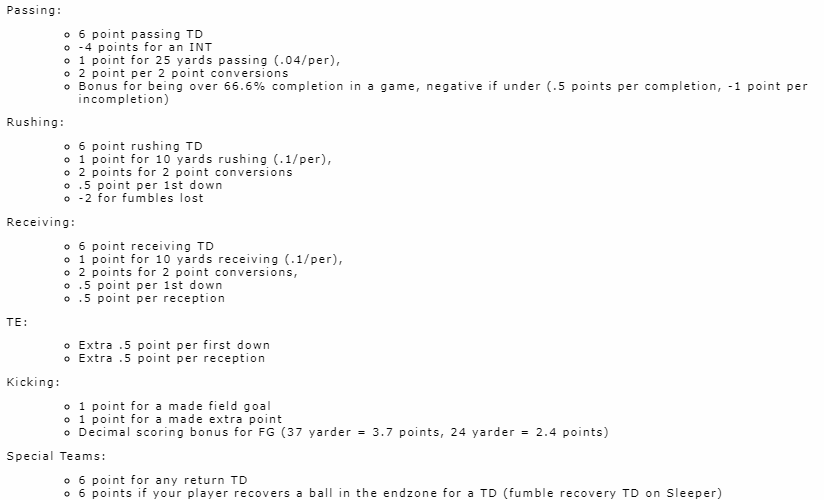 Important notes are the emphasis on quarterback efficiency, with bonuses for over 66% completion, negative points for not meeting that threshold, and enhancements to tight end scoring. But Fish has worked hard to cultivate a balanced scoring system that emphasized building a balanced roster, as shown by 2021 Champion Isaac Sebourn: 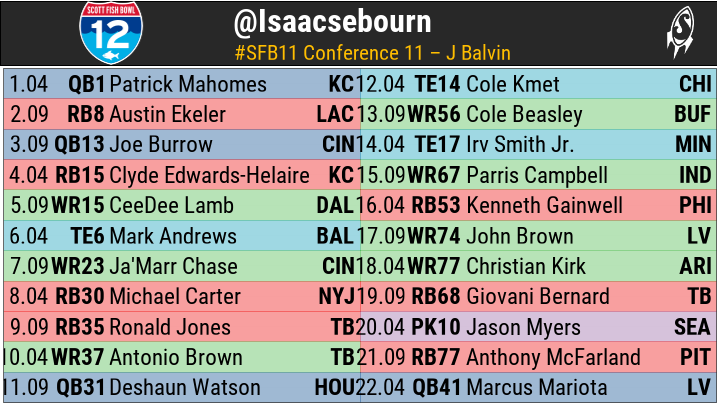 A complete list of past SFB Champions can be found here!

How Can You Get Involved?

If you have read this far and are not involved in SFB12, you are a fantastic candidate to play in SFB13. There is no way to guarantee inclusion short of playing and winning a satellite tournament. There are things you can do to help. Follow the people in this article and become a positive contributor to the fantasy football community. Play in a Fantasy Cares Eliminator event and meet the people involved. Get involved on Twitter the week of SFB. Start a Sleeper Best ball League with SFB settings, play with some new people and donate a nominal entry fee to charity. Most importantly, have fun!

This Or That? Picking a Running Back