Operator, I need to report a murder in Columbia, South Carolina.

So much room for activities! pic.twitter.com/503NkyMvxg

We interrupt your regularly scheduled program to bring you a Fox on the Field at the Arizona State game. Because that's what we do. Watch this little guy move at the end.

The NBA is back and this is my new favorite referee.

Referee Kevin Scott making crybaby eyes to someone in the direction of the Hawks' bench. I'm howling.

Jamie Collins Sr, are you kidding me? pic.twitter.com/emboqH4TS0

Earlier in the week, Bleacher Report reported the NFL was investigating if Aaron Rodgers attended a press conference without a mask.

The NFL is investigating the Packers after Aaron Rodgers appeared at a Halloween party and maskless at press conferences while unvaccinated, per @RapSheet. @brgridiron

Rodgers and the team could be fined if violations are confirmed. pic.twitter.com/OtAiYs6Yzl

I hope they put their Ace Investigative Detective on that one. Aren't most press conferences attended by the press? And like, have cameras and video and stuff?

Got a text from a team exec on Friday: "So the Packers got the Rodgers Rate on following protocols?" https://t.co/YBpkiXo2Mm

Music Note this week is a fun one from Brother's Osborne. This isn't normally my jam but I'm down with this. Plus the video is sort of a throwback. Enjoy. 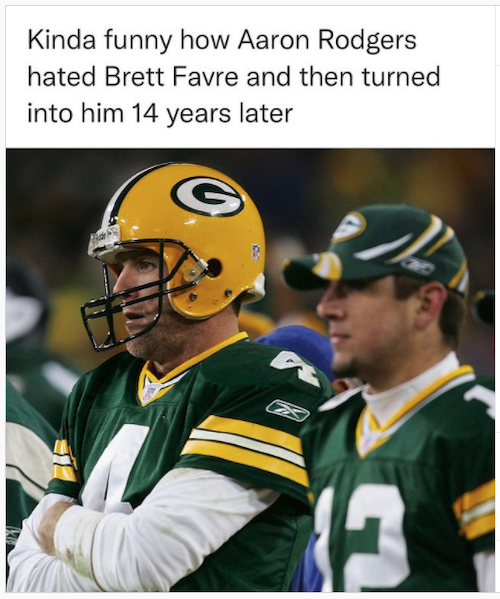 Credit to NFLMemes_ig for that one.

If Belichick retires before I do, I'm not sure how I'll be able to do Random Shots each week.

My question was, Free Odell from what exactly?

But I'm not going to lie, Justin Jefferson can do whatever he wants this week after this...

Lmao Jefferson windmilling his way up the field. pic.twitter.com/v68o1dYzuL

Thanks to @ThatBlitzGuy for that one.

Someone at @BetMGM really likes the Rams.

I so hope this is real. 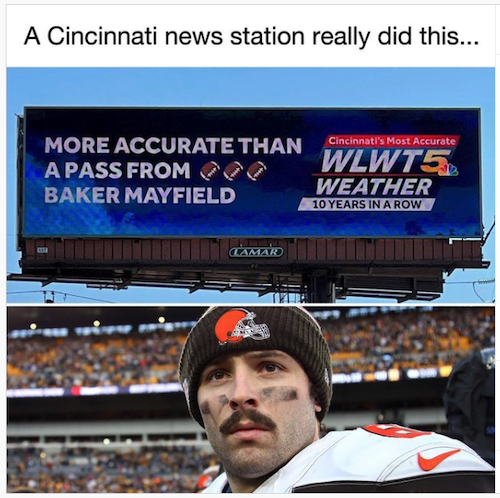 Credit to PickSixPod for that one.

The Bills clearly had their trouble Sunday. But I like Stefon Diggs. From pre-game warmups.

Stefon Diggs played catch with Bills fans again - at one point the ball came close to hitting me and Stefon’s reaction was everything ðŸ˜‚ðŸ¦¬ pic.twitter.com/rXZzdtS3Tn

The Jaguars finally made a field goal on U.S. Soil.

Hang in there, Bengals Fans. I think this is the year.

When your team hasn’t won a playoff game in 31 years. pic.twitter.com/fx0qPv4qBc

It certainly didn't seem to bring them any good fortune, but I loved the Cowboys helmet honoring our Veterans.

The #DallasCowboys will have a red stripe on their helmet to honor the U.S. military & National Medal of Honor recipients on Sunday for the NFL's #SaluteToService game.

Last wore a red stripe in 1976, & the first change to the helmet since the white throwbacks in 2012. pic.twitter.com/Z7StgGJScT

Our game has a rich history.

The Cowboys are wearing a red stripe on their helmets for the first time since 1976 as part of their #SaluteToService pic.twitter.com/xJgoBQvxnS

Minnesota vs Baltimore. That's a lot of purple.

"Josh Allen wants to see Jaguars build on upset of Bills" was not a headline I predicted last week.

Baker Mayfield, at halftime, had a perfect passer rating of 158.3.

Analysts across the country reacted...

Panthers coach Matt Rhule said, "I don’t want to lay things on one person." And then proceeded to lay it on Sam Darnold.

My buddy Adam Harstad with the shark move for NFL GMs.

Given how well Josh Allen is playing against Josh Allen right now if I were a contender in the NFC I'd sign a defender named Tom Brady.

Josh Allen has intercepted, sacked and recovered a fumble from Josh Allen today.

Thanks to Footballguy Keith Overton for that one.

Baker Mayfield with OBJ vs Baker without OBJ pic.twitter.com/JkRt1nNsIN

Thanks to Footballguy Matt Carey for that one.

No way I'm going on the Manningcast thing if I'm an NFL player.

The ManningCast Curse is real. pic.twitter.com/PkKFhRDGeB 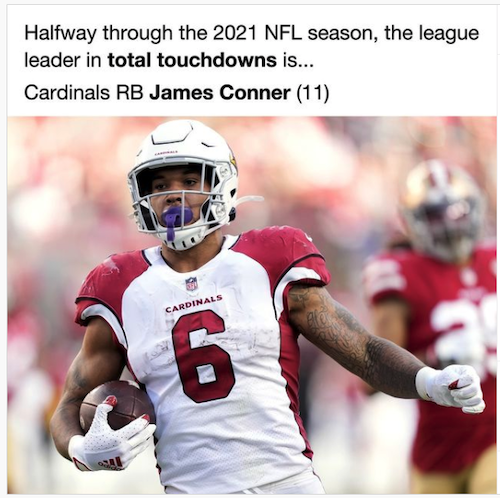 Credit to PickSixPod for that one.

A little digging revealed more to the story.

Video shows the mom and girlfriend of @jordan3love seated at the top of the stadium - many are mocking the @chiefs for this, but the @packers are also responsible - league rule requires home teams to provide visiting teams w/some nice seats - GB chose to use them for others.

Apparently, the Packer front office in charge of assigning seats had also seen Jordan Love practice for the last 18 months.

Thanks to Footballguys Dave Kluge and Matt Carey for this one.

If a picture is worth a thousand words, a video may be worth a million. This tells you all you need to know about Nashville vs Los Angeles. The Rams brought out Michael Buffer for the drawn-out look at me "Let's get ready to rumble" thing that hasn't been interesting in 20 years.

The Titans, on the other hand, were there to play football.

If this had been Kyle Pitts, the internet might have broken.

I don't know anything about MMA fighting. But Chris Barnett at 265 pounds knows how to celebrate a victory.

Today we are all Chris Barnett fans #UFC268 pic.twitter.com/VgHPol19CY

On a serious note, he seems like a good guy.

What a speech by Chris Barnett for his opponent Gian Villante ðŸ‘ #UFC268 pic.twitter.com/wvTtzChIOP

Rainn Wilson, the actor who plays Dwight Schrute on "The Office" posted this:

.@JoshAllenQB is my second favorite quarterback.

Assistant favorite Qb, or assistant to your favorite Qb? https://t.co/LCl34Emxum

Thanks to Footballguy Dave Lundy for that one.

Urban Meyer with an absolute dumpster fire of a roster has now beaten Sean McDermott and Brian Flores...

Kyle Shanahan and those pesky facts...

decided to look up which coaches have better career winning percentages than kyle shanahan. not disappointed pic.twitter.com/dtJIFsEwyE

If you're interested, The Ringer has a much more detailed look here.

College Basketball is back. To the victor goes the spoils.

Hey Aaron, if you really want no shot, you should play for the Lions. pic.twitter.com/IPAavRizdK

Wrapping with this one. I'm writing this on November 10, the day before Veteran's Day. I said this in the Daily Email Update but I'll say it here too: Thank you, Veterans.

Please take a moment and thank a Veteran today. These Men and Women rock.

What is a Veteran?

Some veterans bear visible signs of their service: a missing limb, a jagged scar, a certain look in the eye.

Others may carry the evidence inside them: a pin holding a bone together, a piece of shrapnel in the leg - or perhaps another sort of inner steel: the soul's ally forged in the refinery of adversity.

Except in parades, however, the men and women who have kept America safe wear no badge or emblem.

You can't tell a vet just by looking.

They are the cop on the beat who spent six months in Saudi Arabia sweating two gallons a day making sure the armored personnel carriers didn't run out of fuel.

They are the barroom loudmouth, dumber than five wooden planks, whose overgrown frat-boy behavior is outweighed a hundred times in the cosmic scales by four hours of exquisite bravery near the 38th parallel.

They are the nurse who fought against futility and went to sleep sobbing every night for two solid years in Da Nang.

They are the POW who went away one person and came back another - or didn't come back AT ALL.

They are the Quantico drill instructor who has never seen combat - but has saved countless lives by turning slouchy, no-account rednecks and gang members into Marines, and teaching them to watch each other's backs.

They are the parade-riding Legionnaire who pins on his ribbons and medals with a prosthetic hand.

They are the career quartermaster who watches the ribbons and medals pass him by.

They are the three anonymous heroes in The Tomb Of The Unknowns, whose presence at the Arlington National Cemetery must forever preserve the memory of all the anonymous heroes whose valor dies unrecognized with them on the battlefield or in the ocean's sunless deep.

They are the old guy bagging groceries at the supermarket - palsied now and aggravatingly slow - who helped liberate a Nazi death camp and who wishes all day long that his wife were still alive to hold him when the nightmares come.

They are an ordinary and yet an extraordinary human being - a person who offered some of his life's most vital years in the service of his country, and who sacrificed his ambitions so others would not have to sacrifice theirs.

So remember, each time you see someone who has served our country, just lean over and say Thank You. That's all most people need, and in most cases, it will mean more than any medals they could have been awarded or were awarded.

Two little words that mean a lot, "THANK YOU".

Your friends at Footballguys.

Deebo Samuel Is Elite, No Matter His Role

Running Back Tiers, Targets, and Players to Avoid