An in-depth look into why Breece Hall is an advanced runner, AJ Dillon is disappointing and more film takes from last week's games.

I've had fun starting this article with an in-depth film breakdown over the past few weeks and have heard good feedback on it. This week I wanted to highlight Breece Hall's advanced running ability as a rookie, which makes the rest of his career exciting.

The Jets are running a toss play to the right with a tight end motion to help double-team the play-side defensive end. I'll have a better image next, but I wanted you to see the blocking scheme from this point of view. This is the best angle to watch running plays. The Jets are all stepping play side and blocking the defender in that path or lane. This is a toss stretch play.

Breece Hall has a decision to make just a few frames later. Both red arrows show his decision. The defender in the purple circle is squeezing down the hole with the right red arrow, which is more advantageous to Hall because he has two blockers on the defensive end and another blocker moving toward the linebacker. The left red arrow is difficult because the same defender in the purple circle is leveraged that way and can make the tackle. 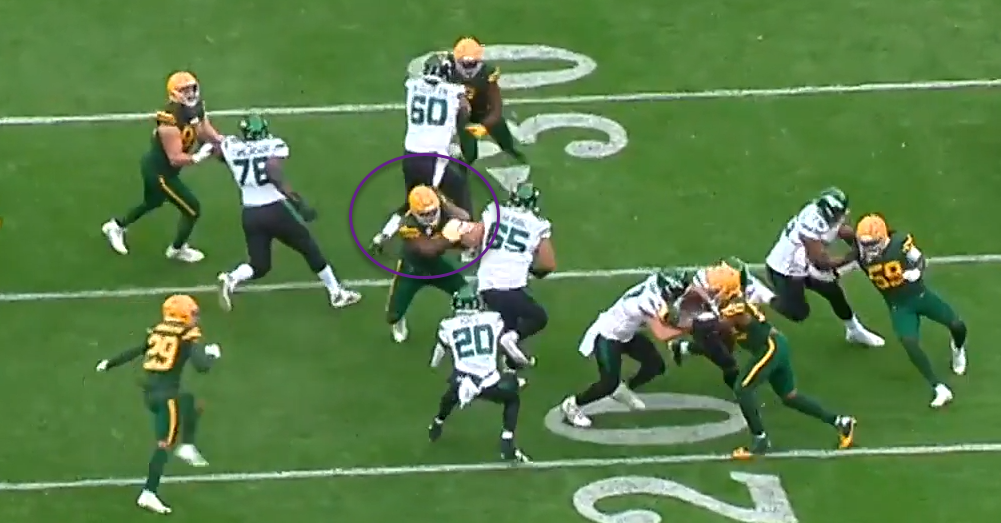 Hall gathers his feet and takes a step to the left. This makes the defender in the purple circle react and move further that way. 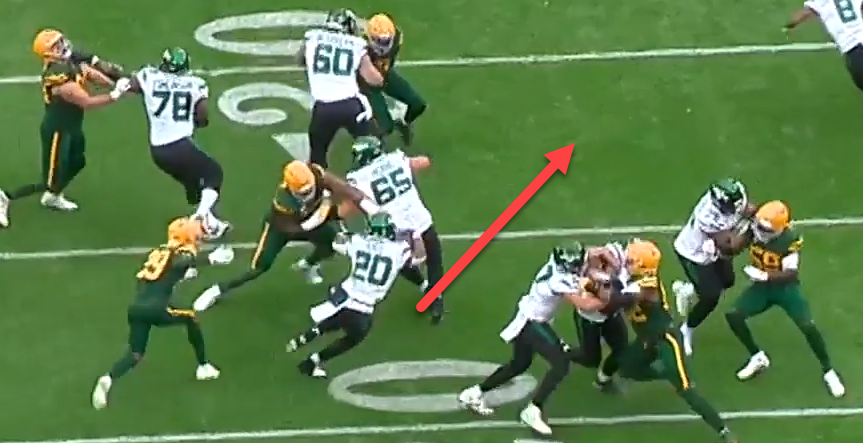 This small movement helps create a much larger running lane than he had initially. Also, look at how the defender is getting his left arm free to reach and grab Hall. 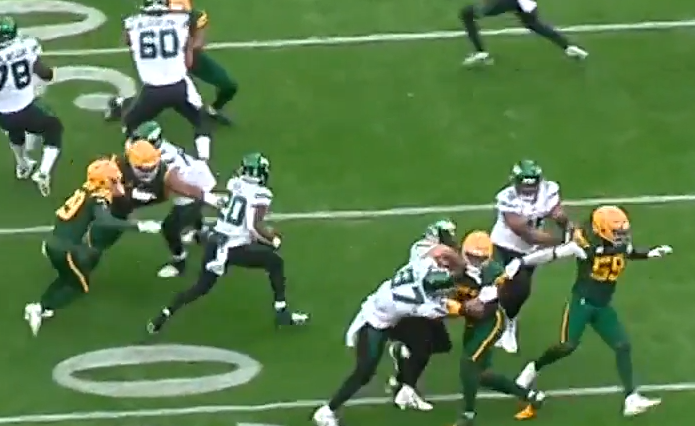 Hall makes a slight turn of his shoulders to the right to create less area for the defender to grab. 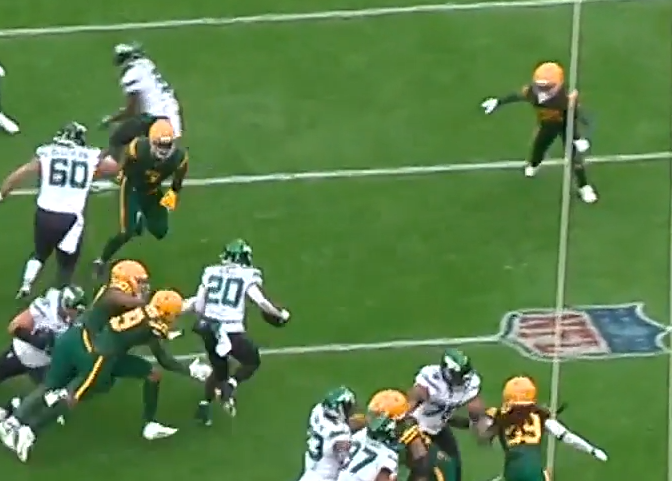 This small shoulder turn only allowed for the defender to grab his left arm. But Hall now has two more defenders to think about. 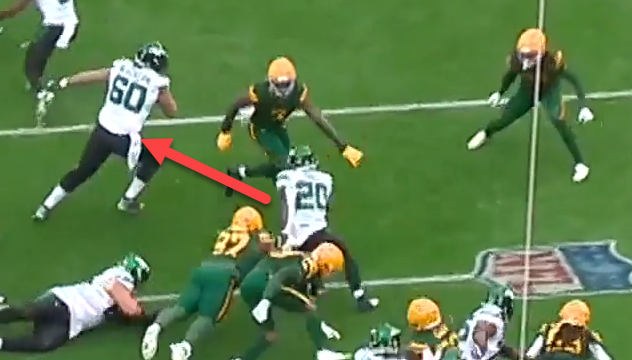 The combination of balance and cutting paid off for Hall to make the defender(purple circle) miss. The blocker offers a little assistance as well, and he's helping hold off the far-right defender from making the tackle as well. However, now Hall has another defender(black circle) with some area to maneuver. 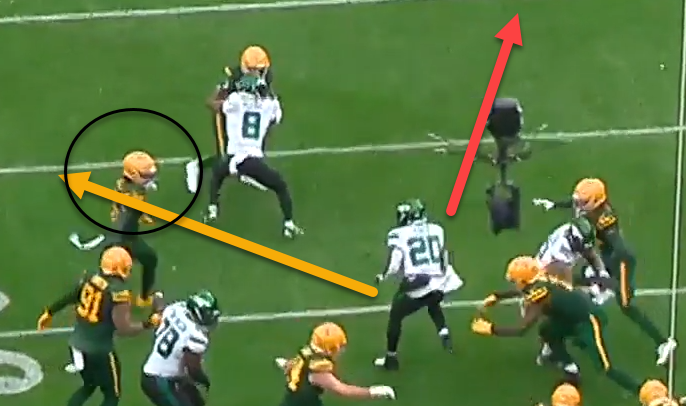 Hall's eyes are locked onto the defender(black circle), and he has two decisions. Red arrow to outrun and stiff arm. Or the yellow arrow to make another cutback. Hall is already gathering his feet in this frame to choose the yellow arrow path. He decided to cut against the defender's momentum again. 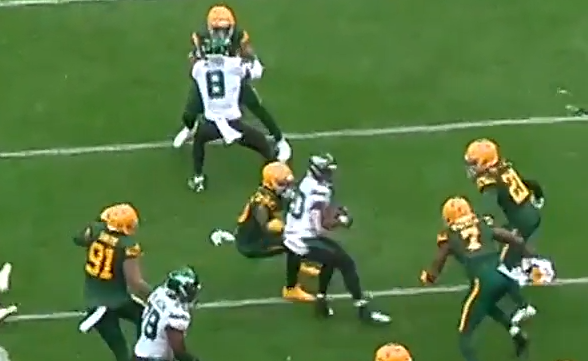 Hall doesn't win this battle with a spin move as the defender wraps him up, and he only gains another three yards after contact here.

This single run from Hall reveals so much about him as a player. His eyes are constantly focused on the next task at hand, and he's able to make quick decisions, even when still dealing with the previous task. He understands how to use defenders' momentum against themselves and then cut opposite. Running under control with the balance to make successful cuts. Lastly, Hall understands how to manipulate defenders to create bigger spaces for holes and how to turn his shoulders to get skinny through those holes.

Disclaimer: Coaches are critical by the nature of the profession. I will reveal the good and bad about players. It doesn't mean I'm a homer or a hater, so the kids say. It's just honesty.

Wild game overall. The Saints jumped out to an early lead because of a fumble on special teams and scored on six of seven possessions in the middle of the game. One of the problems for the Saints was settling for field goals instead of touchdowns. The Bengals had four touchdowns, which all consisted of 60 yards drives or longer. The game-winning play by Ja'Marr Chase just further reveals the elite talent that he possesses.

Burrow is a good player but inconsistent. He made some big plays with his feet but settled down as the game went on because he trusted his great WR group to make plays. Better things happen when Burrow throws on time versus progressing past his second read in the pocket.