Can Saquon Barkley Be a League-Winner?

Breaking down whether Saquon Barkley is worth targeting at his current ADP.

Saquon Barkley seems like the forgotten running back of the NFL. He rushed for over 1,300 yards as a rookie and finished as RB3 overall in PPR formats. He finished that season with 361.6 fantasy points per game and averaged 24.1 points per game in PPR formats. The following season he would suffer a high ankle sprain but was still able to eclipse 1,000 yards and finish as a low-end RB1. The last three games of that year showed off his generational talent. Christian McCaffrey was on his way to putting up historical fantasy numbers, but a healthy Barkley outscored him in all three of those games. Albeit by a slim margin, it does show Barkley’s talent when healthy. Unfortunately, his injury trend popped up again in 2020, with him tearing his ACL in week two and missing the entire season. He returned in 2021 but struggled to return to form on the field missing another four games with an ankle injury. He would finish as RB32 in PPR formats and be unstartable down the season's stretch. The biggest question this offseason is whether to take the risk and draft Barkley or not? He is currently being drafted in the third round as RB14, according to Footballguys ADP.

Based on his current ADP and value in redraft leagues, you should be targeting him as your RB2. When healthy, few running backs are better. He will be a key piece to many fantasy championships this year.

In college, Barkley rushed for 3,843 rushing yards and scored 43 touchdowns on 671 carries. He also caught 102 passes for 1,195 yards and eight touchdowns and added 18 kickoff returns for 500 yards and two touchdowns. He was an exceptional talent, and as a prospect, scouts fell in love with his positional versatility. Barkley could run inside and out with tremendous speed, lateral agility, and acceleration. He was also used all over the field at Penn State, including as a receiver. They lined him in the slot and took advantage of the mismatches. He also was Top 5 in the country in breakaway percentages and showed the ability to be a big play-threat all over the field. When trying to project players coming off injuries, the first criterion has to be their athletic profile. Generational athletes bounce back quicker than other players, and he fits that criteria. One way to compare athletic profiles is by using their relative athletic scores (RAS, for short). RAS is a way of measuring a player’s athletic testing to their size as well as historically. Each prospect is given a score from 0 to 10 based on how their RAS matches up to those of the same position throughout history. A perfect 10 is the top of the group and the best athlete to work out at that position, while a 0 would be the worst. Here is how Barkley and Adrian Peterson compare. 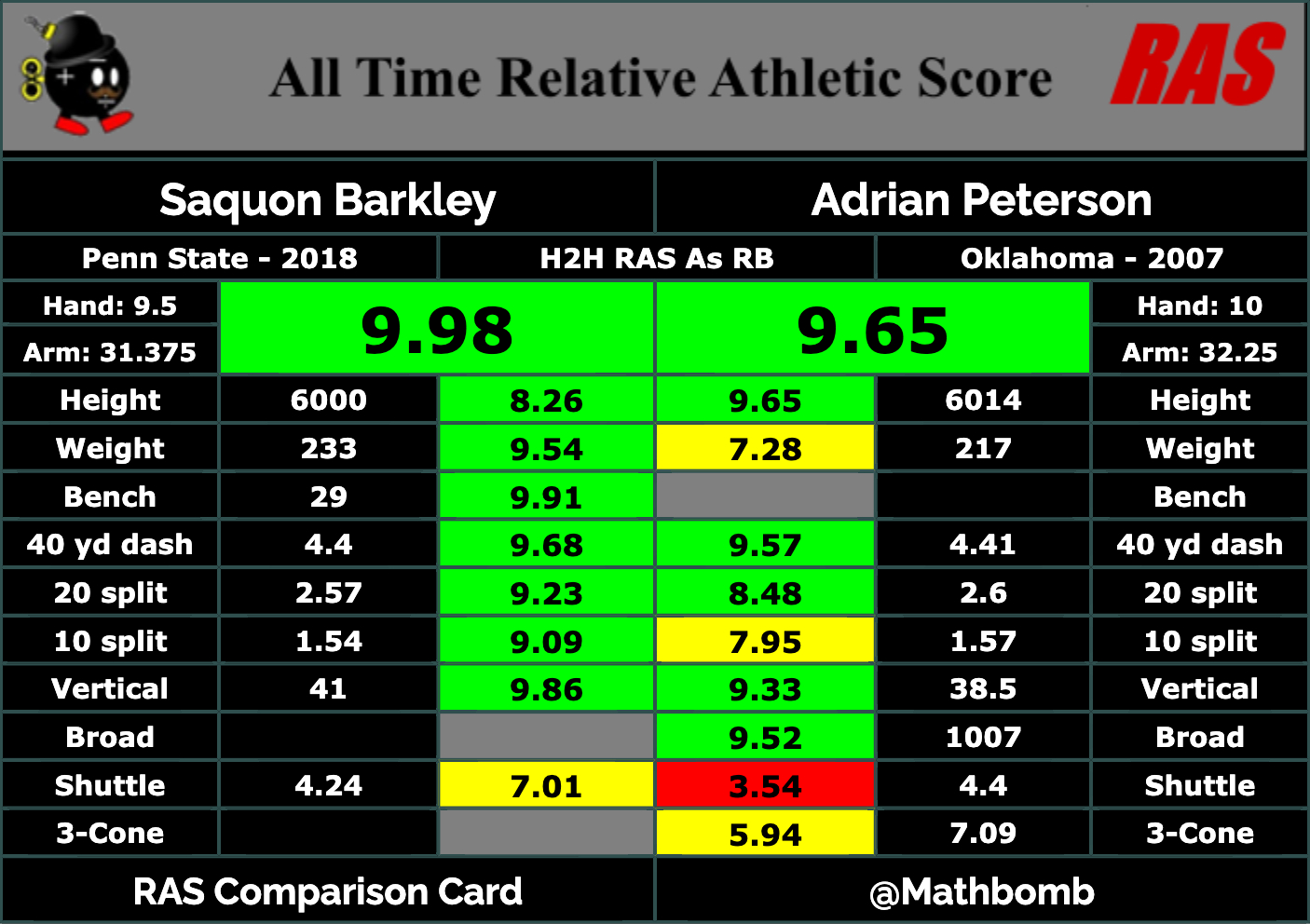 Based on their respective RAS scores, Barkley tested as the better athlete coming out of college. This is important to note, considering Peterson also tore his ACL in his career. Peterson tore it at the end of his fifth season, winning the MVP the following season. He rushed for 2,097 yards and twelve touchdowns in 2012. He would follow that up with another 1,000-yard season in 2013. Peterson is the standard when looking at running backs after ACL injuries and their recovery.

In contrast, Barkley had a tough year in 2021 due to a poor offensive scheme and poor quarterback play. He’s just as good, if not a better, athlete than Adrian Peterson. That should make fantasy managers more excited about his return to form. He's coming into 2022 healthy.

Before we dive into his health, we should understand that there is no such thing as injury prone. Zach Binney from Football Outsiders breaks down the notion here, but essentially, according to the numbers, every player has at least a 50/50 chance of playing every game in a season. No analytical research will say that Barkley is injury-prone; he’s just suffered injuries throughout his career. Many could say freak injuries. Fading him based on injury concerns is a flawed process for a manager. Three other running backs have torn their ACL and have had a RAS score of over 9.0. Those three running backs are Edgerrin James, Adrian Peterson, and Ronnie Brown. Adrian Peterson and Edgerrin James bounced back from their injury and had very productive seasons following the injury. Peterson had a 2,000-yard season the first year back and another 1,200-yard season the second year removed from the injury. Edgerrin James would go on to have four 1,000-yard seasons after his second year removed from his ACL tear. Ronnie Brown is the only player to struggle after his ACL tear, but that can be attributed to his schemes and split role in the Miami backfield with Ricky Williams. While three players is a small sample size, the reality is players with their type of athleticism are exceedingly rare. When looking at Barkley’s outlook for 2022, there will be no split role, and history tells us running backs with his RAS score bounce back after the second year removed from an ACL injury. There is a risk that he is a boom or bust play, but his generational athleticism should have you betting on more boom than bust.

Everything Season Long and DFS for Week 14