The Holidays are upon us. Let's open like we always do with the best rendition I've heard in a while of "Have Yourself A Merry Little Christmas" courtesy of that noted Holiday Crooner - Bill Belichick

Just like last year, I'm starting right off the bat with the music as we cover all the Holiday bases. First, a Run DMC - Charlie Brown mashup of Christmas in Hollis from the Best Christmas Movie Ever - Die Hard.

Next up is Adam Sandler with the classic Chanukah Song.

And for a picture of cool personified, he butchers the words but still kills it live.

Lastly, one of my favorite Sports Illustrated covers from a few years back featuring Belichick Santa. 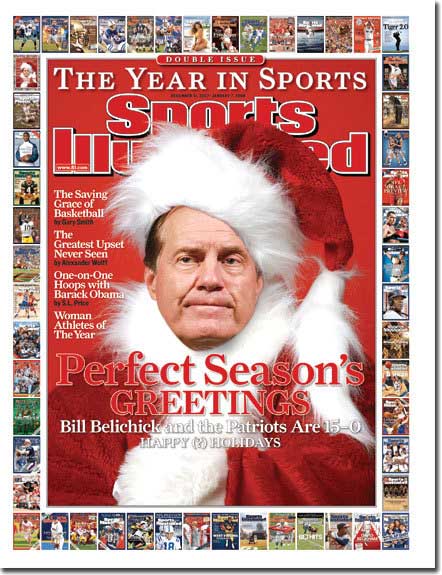 Happy Holidays from all of us at Footballguys.

"Coach, with injuries to Evans and Godwin, Antonio Brown would like to talk about an extension. You have a minute?" pic.twitter.com/N7hYEZM2nE

I get it though. Things move fast. As the Dude says, "I've got information man. New #### has come to light."

College Bowl Season is here. From The Athletic, Wyoming beat Kent State, 52-38, in the Famous Idaho Potato Bowl. Wyoming coach Craig Bohls is shielding himself from a celebratory french-fry onslaught. It is the best celebration so far this bowl season*. 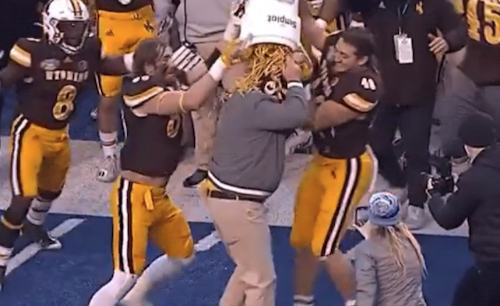 *The Duke’s Mayo Bowl is promising a mayonnaise bath for the winning coach. Stay tuned.

I know Cole Beasley isn't the fastest guy in the world, but replacing him with an offensive lineman?

OL Evin Ksiezarczyk has been signed to the practice squad. #BillsMafia pic.twitter.com/LNkrLyqAZx

Is there a more underappreciated quarterback in the league than Derek Carr? He led his 28th game-winning drive Monday night. That's tied with the most by any QB since he came into the league in 2014. Plus he has to learn a new playbook every year.

When you're the GOAT, you get a much longer leash. That's just how life works.

But this is still lame. On that note, the Saints sure give them trouble.

Looks like Tom Brady goes to the #Saints sideline and says: "Go f*** yourself." pic.twitter.com/CA2tDakqXn

My favorite thing is after a great team or player struggles, fans immediately jump to "They've figured him out now! Here's the blueprint!"

The "blueprint" for New Orleans in stopping Brady is apparently putting tons of pressure on the quarterback paired with blanketing the receivers.

Wow. I wonder why no other teams have thought of that?

Like lots of things, it's not quite that easy.

Jonathan Taylor. You're kind of ridiculous. He also adds a little bit about the look back.

"Go ahead and pop one off right here, huh?"@cj_wentz asked. @JayT23 delivered.

New episode of #HardKnocks: In Season with the @Colts drops tomorrow at 10pm ET on HBO/HBO Max! pic.twitter.com/ZaPhdZaWLq

Hang it in the Louvre.

Put this photo in a museum pic.twitter.com/r38ESeT0kK

Everyone wants to rag on the Cardinals. I see it more as the Lions came to play. Well done, Detroit.

Dan Campbell and the Lions pulled a massive upset on the Cardinals in Sunday Night Football ðŸ˜¤ pic.twitter.com/ZoNUSp0zUt

This is what I’m getting all y’all for Christmas ðŸ˜‚ðŸ˜‚ðŸ˜‚ pic.twitter.com/ppCocJJA2J

This is the time of year when we start speculating on which teams may move on from their coaches. Joe Judge is an interesting case. I think I have a pretty good idea of how management should weigh out the pros and cons and make a reasonable decision.

Then I'm reminded management also thought this was a good idea and I realize all bets are off. 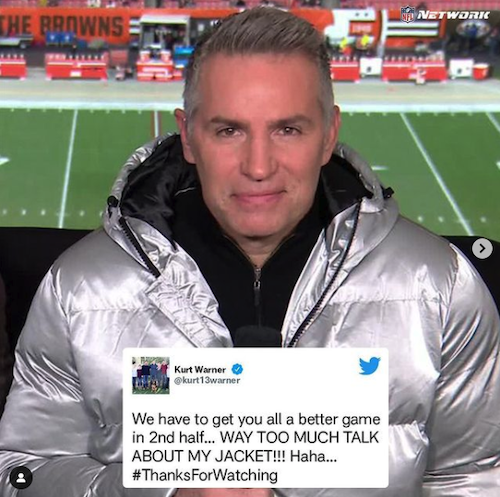 Up until this week, Lamar Jackson had never missed a game due to injury.

Ravens’ QB Lamar Jackson is dealing with a bone bruise in his ankle, not an ankle sprain, per source. Jackson never has missed an NFL game during his four-year career due to injury; he has missed two due to illness.

He's now missed twice as many games due to illness as he has injury. I'm not sure what to make of that.

Darius Leonard with the stiff arm.

Come for the Leonard INT...

The Internet predictably blew up with "OMG! He should be a tight end!".

That'd be awesome. Can we let only wide receivers try to tackle him? 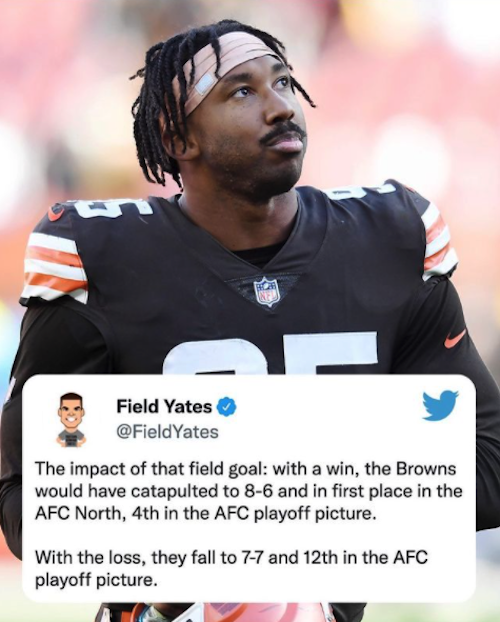 Thanks to Ari Meirov for that one.

Fantasy General Managers can relate to the Ravens...

If you're a glutton for punishment, here's the Ravens' Week 1 depth chart. (Not listed: RB J.K. Dobbins, already on injured reserve.)

I was wrong about Jake Paul. These opponents are not elite boxers, but they're not tomato cans either. Tyron Woodley here is a former UFC welterweight champ.

Kicker. Quarterback. Whatever it takes...

I'm convinced that P.J. Walker is the fallback plan for anything that goes wrong for the Panthers at any position within the organization https://t.co/K5SgYnlSHz

I've never understood the upside for teams that want to flex on the home team logo in pre-game.

Do they really think the other team is going to think, "Dude. Those guys must be tough. Standing out there on the logo and all. Hold me, I'm scared."

The #Titans learned nothing from the #Raiders last week, this is how they start the #Steelers game..pic.twitter.com/PXa7tJR9JV

I love how the talking heads are spouting off the stats about how the Colts win when Jonathan Taylor runs for 100 yards. As if all you need to do to win is run the ball.

Chicago’s 1936 throwbacks are my favorite uniforms this year. 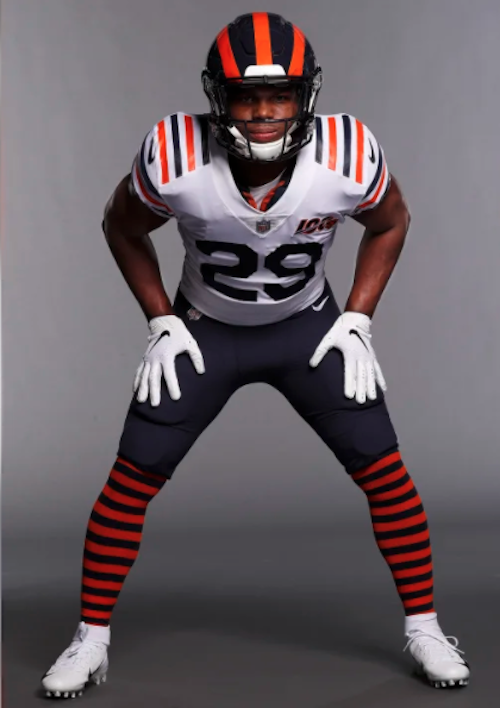 Saquon Barkley. You're kind of ridiculous too.

Saquon with the hands ðŸ‘€pic.twitter.com/0gIUwS5UdZ

Elliott had some help here. But Dang.

It got even better from there...

The whole world needs to see Christian Wilkins hit the worm after catching a TD. What a gem. pic.twitter.com/nKAfhIbZ7F

Dolphins Big Man Christian Wilkins is no stranger to sweet celebration. Flashback to when Clemson won the National Championship. pic.twitter.com/eFI6IzlORT

I don't care which team you root for, I hope you're able to stop and take in what Aaron Rodgers is doing on a weekly basis. I fully understand rivals and the hate they entail. But this is special.

Bill Belichick was clearly visited by the ghosts of Christmas past, present and yet to come. pic.twitter.com/mUIdGtec6y

I love today's NFL with the focus on offense. It's fun and exciting and it's hard to deny the product is fun to watch. But I also love to see a play like Joe Haden makes here where good old-fashioned tough defense and tackling won the game.

JOE HADEN WITH THE CLUTCH TACKLE

Cam Newton threw it right to the #Bills ðŸ¤·‍â™‚ï¸pic.twitter.com/hxHpvThF5r

The flashy passes get all the buzz but an underrated part of Aaron Rodgers' game is play faking.

Rodgers is having wayyyy too much fun with these play fakes lately... Ya sneaky bastard @AaronRodgers12 #HiddenBallTrick pic.twitter.com/sPdaCYhprd

Wrapping with this one. I said this last year and I'll say it again. This has been a tough year for many people. And the Holidays can make it even tougher for some.

Shauna Niequist is a writer I enjoy. She wrote this a few years ago but I think it applies now.

That's my hope for you. That the pain of what you've lost this year may fade a bit as we seek out and focus on what's right and good and worth believing. If it's tough for you, give yourself some grace. I'm with you.

Merry Christmas and Happy Holidays to you and yours from all of us at Footballguys. Rock on.