Iowa entered a mid-October game against Purdue, ranked number 2 in the AP poll, their highest rank since 1985. Then David Bell happened. The Purdue wide receiver shredded the Iowa secondary for 240 yards leading to a stunning upset. But a play at the beginning of the third quarter showed his potential while also highlighting concerns. Bell lined up on the left hash, breaking across the field on an intermediate route, catching and turning upfield; he used a stiff arm on defender Matt Hankins in a trail position. Breaking free, Bell had the defense beat down the sideline but was caught from behind on the 20, gaining 47 yards. The Iowa defense stiffened and held Purdue to a field goal, stretching the lead to 17-7. The lack of touchdown ultimately did not matter, but Bell's 4.65 speed was evident.

These specific roles are helpful in player scouting to separate players into buckets; the ability to fill a role provides the three steps necessary to hit on rookie picks: earning a roster spot (almost assured with draft capital before round 4), moving to earn regular playing time, and ultimately the holy grail for fantasy football, targets. We can all think of specific models for each position, a player like Cole Beasley in the slot, DeSean Jackson streaking vertically to stress defenses, and lastly, a big receiver like Mike Williams. The 19 red-zone targets of the latter ranked 14th in 2021.

The rub, however, is natural ceilings on players who strictly fall into these categories.

Everything Comes Back To Targets

The idea behind target valuation is simple. Things like catch rate, yards per attempt, and red zone conversion can fluctuate. But targets are a countable commitment to player usage. An examination of the top 24 wide receivers in fantasy points in 2021 shows all but four topped 120 targets: Mike Evans, Tyler Lockett, Tee Higgins, and Amon-Ra St. Brown (119). Evans only hit 114 targets but spiked his point total off an exceptional 12.28% touchdown per target. The top three players in this category were Allen Lazard (13.33%), Dawson Knox (12.68%), and DeAndre Hopkins (12.50%), players who fit the big man profile and carved out reliable red-zone roles. Meanwhile, Lockett (107 targets) and Higgins (110) excelled in yards per attempt with 10.98 and 9.92, respectively, in a more traditional vertical role.

In a volume-based game, the conclusion is simple: either get the most volume or a player who dominates one of the point-scoring categories on the looks they receive. 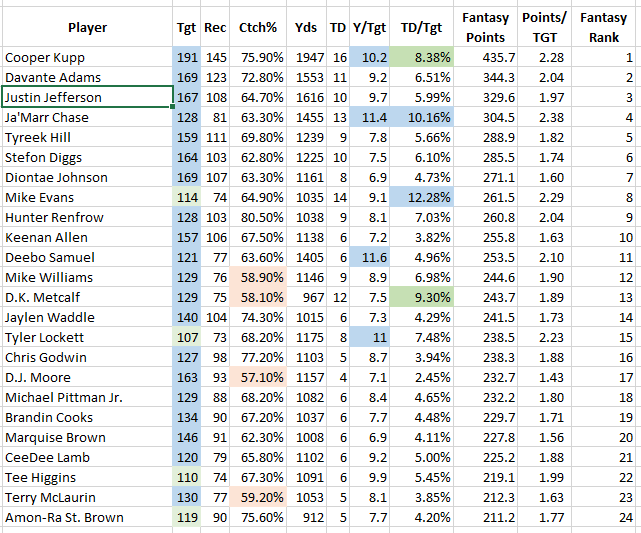 The first takeaway is that players who dominate those point categories to target ratios can rise to solid fantasy contributors with increased volume. A point Footballguy's Dave Kluge hit well on Allen Lazard. Other names who could fit with increased volume are Knox, and Kendrick Bourne, who posted 11.43 yards per target on his 70 targets, a number that ranked second to Deebo Samuel. Bourne has yet to see real target competition added, and with Mac Jones becoming more comfortable, the overall passing ceiling of the Patriots could rise. Meanwhile, the Bills lost longtime Josh Allen's safety blanket Cole Beasley. While Jamison Crowder provides a potential talent upgrade; the reality is Allen has a level of comfort working with Knox that Stefon Diggs only tops.

A total of 41 receivers exceeded 100 targets, but only two of those players ended up outside the top 60 in fantasy points: Laviska Shenault Jr (80th) and Robby Anderson (68th). The reasons are clear, Shenault failed to score a touchdown, while Anderson's 4.7 yards per target and 9.8 yards per reception were among the lowest in the league. Both players have obvious red flags in 2022; the Jaguars' additions of Christian Kirk and Zay Jones put a damper on the overall target outlook of Shenault. Meanwhile, Anderson profiles as a classic field stretcher, but Sam Darnold's limitations and the Panthers' emphasis on shorter passes put him in an uncomfortable role. The team potentially stuck with Darnold or relying on a rookie quarterback impairs Anderson's ability to rebound.

The importance of getting on the field is step two, and the easiest path to playing time is falling into a comfortable role. At first glance, this is positive; that late rookie pick made it! But players who can not ascend outside of one specific role become a death trap.

Cole Beasley established himself as a premier slot receiver, attached to the best quarterback in fantasy, he earned a significant volume of targets with 112, and he finished WR52 in total points. No player who saw that level of volume fell lower than WR37. His 6.2 yards per target fell nearly a whole yard below anyone with that volume, and he only scored one touchdown. He paints the classic picture of limitations within a slot-specific player.

Slot specific players are merely break glass in case of emergency options and often serve to clog rosters. They provide steady floors but lack any ceiling. In leagues that base draft position off potential points, they are silent killers, failing to swing weeks while chipping away at floor points.

On the flip side, Kenny Golladay's failures were well-publicized. But digging into the numbers paints a horrible picture. A total of 137 players saw at least 35 targets. Golladay's 48.70% catch rate only beat Anderson's 48.20%. Golladay has seen previous success because he can blend two roles, attacking vertically while still serving as a significant red-zone threat. In 2021 he saw the worst of both worlds, a team incapable of finding him deep who also did not find the red zone.

Players who serve in a field-stretching capacity will have low catch rates but deliver splash plays. The problem lies in a small likelihood of hitting two of these plays in one game in a league that has seen intended air yards per attempt creep downward. In 2018 Josh Allen and Jameis Winston topped 10.8 intended air yards per attempt. In 2021, only three players exceeded 9.0, with Russell Wilson's 9.9 leading the league and a full yard lower than just four seasons ago.

Point guards, three-point specialists, and rebounders are essential parts of basketball teams. But championship squads run through players who can blend these skills.

Examination of the top of fantasy receiver leader boards shows one evident trait- versatility. Receivers who can line up in the slot, outside to attack vertically, win in the red zone, find space to move the sticks, and accrue yards after the catch. But almost all of these players used a traditional role to find initial playing time. Stefon Diggs started his career outside, where he played 87% of his snaps as a rookie; that number has moved to 78% as he emerged as an elite receiver. Hunter Renfrow played 72% of his snaps inside as a rookie, but in his breakout 2021, that number moved to 65%. Davante Adams has one of the more extreme swings, lining up outside 93% as a rookie until dropping that number to 70% this past season. Meanwhile, Cooper Kupp's breakout was driven by a different change, attacking vertically in 2021, raising his average target depth from 6.3 to 8.6. (Alignment information from PFF.com) 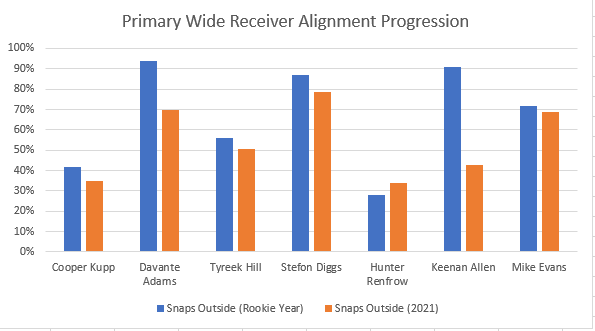 The ability to contribute in multiple areas increases the potential target volume. It also counters the defensive chess moves to cover primary receivers.

Back to David Bell.

Bell is an analytics dream. He is an early declare who has consistently produced at a high volume throughout his career. But his lack of vertical speed dismisses him from stretching the field, and his size makes it difficult to envision a traditional role as a conventional red zone threat. His path to consistent playing time likely lies as a chain mover who can work within zones. Juxtapose against another receiver in this class valued similarly, Christian Watson. Watson has the size of a traditional red zone threat at 6'4" and the speed (4.36 40) to stretch the field.

Kent Lee Platte (@MathBomb) has a fantastic tool to measure the differences in athleticism with his relative athletic score and the results from these players with similar rookie ranks are staggering. 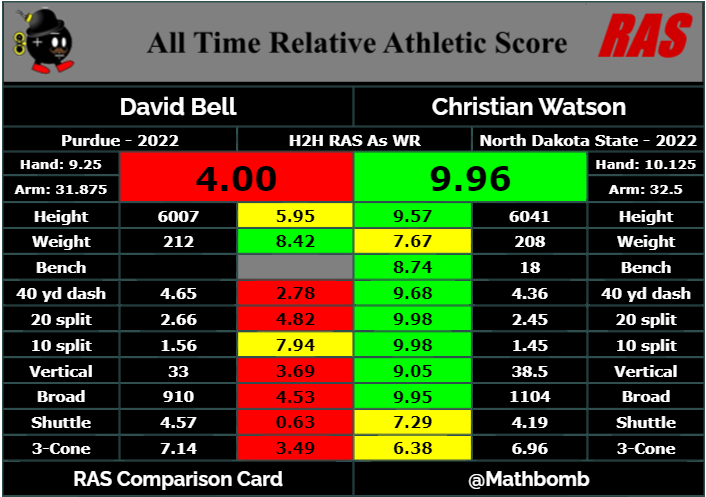 When it comes to rookie profiles in a dynasty draft, look for players who can win in multiple areas. Versatility drives volume, and volume drives fantasy points.

Allen Robinson is Poised for a Bounceback

Tyreek Hill: The Next Wide Back