Welcome to Regression Alert, your weekly guide to using regression to predict the future with uncanny accuracy.

For those who are new to the feature, here's the deal: every week, I dive into the topic of regression to the mean. Sometimes I'll explain what it really is, why you hear so much about it, and how you can harness its power for yourself. Sometimes I'll give some practical examples of regression at work.

In Week 2, I laid out our guiding principles for Regression Alert. No specific prediction was made.

In Week 5, I talked about how preseason expectations still held as much predictive power as performance through four weeks. No specific prediction was made.

In Week 7, I demonstrated how randomness could reign over smaller samples, but regression dominates over larger ones. No specific prediction was made.

As for the yards per target crowd, we continue to see some small regression, but not quite enough to completely flip the groups. As I said last week, though, time is regression's greatest ally, so we'll see how they fare over the final two weeks of the sample.

When Trends Are Noise

Quarterbacks are playing longer than ever these days. Last year, Tom Brady set the record for oldest player ever named MVP by the Associated Press, breaking a record that had previously been set by... Peyton Manning, just four years earlier. The year before, he became the second-oldest quarterback to ever win a Super Bowl, behind only Peyton Manning in 2015. This year, Drew Brees is an early front-runner to be named MVP. He'd pass Peyton for the 2nd-oldest in history. Philip Rivers is also in contention, and if he wins he'll be the 3rd-oldest AP MVP.

Why are quarterbacks playing so long, though? Is it because advances in training, nutrition, and medicine are extending careers? I'm sure that's part of it, but if that's the entire story it becomes hard to explain why running backs aren't seeing their careers similarly extended. With all due respect to Adrian Peterson and Frank Gore, a 30-year-old running back rushed for 1,000 yards 21 times from 2000-2009. They only did it six times in the eight years since.

Is it because the league is shifting toward the pass and the NFL is instituting more and more rules designed to protect quarterbacks? That undoubtedly plays a role, but if that's the entire story we're left to explain how wide receivers haven't seen a similar increase in longevity thanks to more roster spots being devoted to the position and protections being granted to defenseless receivers. With apologies to Larry Fitzgerald, a receiver topped 1,000 yards at age 34 or older 20 times between 2000 and 2009. They've only managed it four times since.

In fact, there's no other position where careers are getting longer like they are at quarterback. In the last decade, eight different offensive linemen have started at least half a season at age 36 or older. Six different players did it in the year 2000 alone. There were seven different double-digit sack seasons by a 36-year-old player between 1997 and 2000. There has been one in the 17 years since. Even kickers aren't seeing any major improvements. From 2000-2009, the league averaged three kickers and punters per year over the age of 40. From 2010-2017, it averaged 2.5. (Old placekickers were slightly up, but old punters were way down.)

Compare that to the six years immediately prior, (1994-1999). Those drafts gave us Peyton Manning, fringe Hall of Famers Donovan McNabb and Steve McNair, multiple pro-bowlers Matt Hasselbeck, Daunte Culpepper, and Kerry Collins, and... that's it. Now look at the six years immediately after, (2006-2011). Those drafts produced a pair of players on a fringe Hall-of-Fame trajectory in Cam Newton and Matt Ryan, as well as long-time starters Matthew Stafford, Jay Cutler, Joe Flacco, and Andy Dalton, plus guy-who-actually-made-two-pro-bowls Vince Young. (Seriously, that happened.)

This idea that a lot of "trends" are nothing more than ebbs and flows in incoming talent has especially big implications in dynasty leagues. I started playing dynasty in 2007, and the overwhelming consensus at the time was that you had to build your team around running backs, because we had just passed a massive boom in running back talent, (LaDainian Tomlinson, Priest Holmes, Ricky Williams, Shaun Alexander, Clinton Portis, Marshall Faulk, et al.) This prevailing wisdom was only reinforced in the next few years thanks to the 2008 draft class, arguably the best overall collection of running back talent in modern NFL history.

By 2015, this conventional wisdom was completely flipped on its head. The true path to success, everyone realized at the same time, was actually to build around wide receivers. The NFL was a passing league, now! It didn't even care about running backs anymore. After all, the 2011 draft didn't see a running back come off the board until the 28th pick, the latest teams had ever waited in the common draft era. And then in 2013, for the first time, the entire first round went by without a running back being selected. And in 2014 it happened again!

But you probably see where this is going already; the 2009-2014 drafts weren't indicative of anything larger than the fact that 2009-2014 happened to be incredible years for incoming receivers and terrible years for incoming backs. The five years since, however, have given us 8 pro bowl running backs (Todd Gurley, Ezekiel Elliott, Melvin Gordon III, David Johnson, Kareem Hunt, Alvin Kamara, Jay Ajayi, and Jordan Howard, with Saquon Barkley and James Conner decent bets to add to that total this year), vs. just 3 pro bowl wide receivers (Amari Cooper, Tyreek Hill, and Michael Thomas; Tyler Lockett and Pharoh Cooper also made the pro bowl for their work as returners).

Here's a chart that helps visualize the idea that incoming talent is random and everything that's random is prone to regression. Here's the average age of the top 24 fantasy quarterbacks, top 36 running backs, top 36 receivers, and top 24 tight ends. This age is weighted by fantasy production, so the #1 player contributes more to the average than the #24. In theory, if no new talent came in we should expect the average age to tick up by ~1 per year as everyone became a year older. So when the age increases, that suggests veterans are holding off young challengers, while a decreasing average age indicates a youth movement at the position.

I've shaded the cells to make trends easier to see; RED means the position as a whole is younger than average, while BLUE means that the position is older. 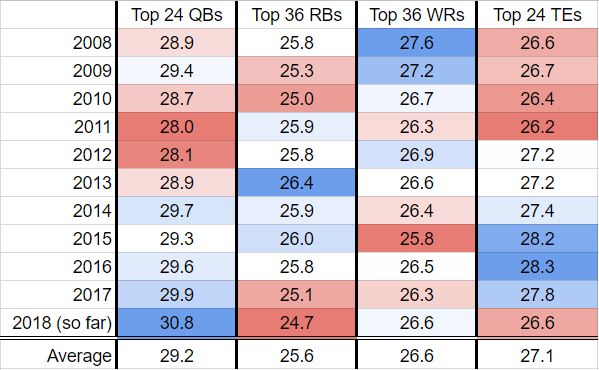 Looking at the chart, you can see the fluctuations in talent working their way across the league. The 2000-2005 quarterbacks took over in the late 2000s and have been slowly aging since. The 2008 running back class had an immediate impact across the league, as have the recent classes. Average receiver age plummeted nearly immediately after the historic 2014 class. The tight end position has been aging alongside Rob Gronkowski and Jimmy Graham since their breakout in 2011.

But it's important to remember that these trends aren't trends at all. They're descriptions of a random process. That quarterback list isn't going to keep getting bluer and bluer over time; the 2000-2005 quarterbacks will eventually retire, a new crop of young stars will take their place, and the chart will tilt back into the red. The 2019-2021 classes are unlikely to produce as many star running backs as the 2016-2018 classes did, so the position will likely start to age alongside Gurley, Elliott, Gordon, Hunt, Kamara, and Barkley. We'll doubtless see more stellar young receivers start to enter the league at some point to help offset the aging of 2010-2014's stars. We're already seeing new talent emerge at tight end.

This isn't to say that the NFL never has any trends. The league really is trending toward the pass, even if talent disparities might have exacerbated the process in recent years. Kickers are getting more accurate every year, (even if the salience of a few missed extra points suggests otherwise). But for the most part, when faced with an apparent trend, it's best to remember the old saying: it's not the X's and O's, it's the Jimmys and Joes.

Odds and Ends: Championship Round

Odds and Ends: Championship Round

Odds and Ends: Divisional Round

Odds and Ends: Playoff Futures and Wildcard Round