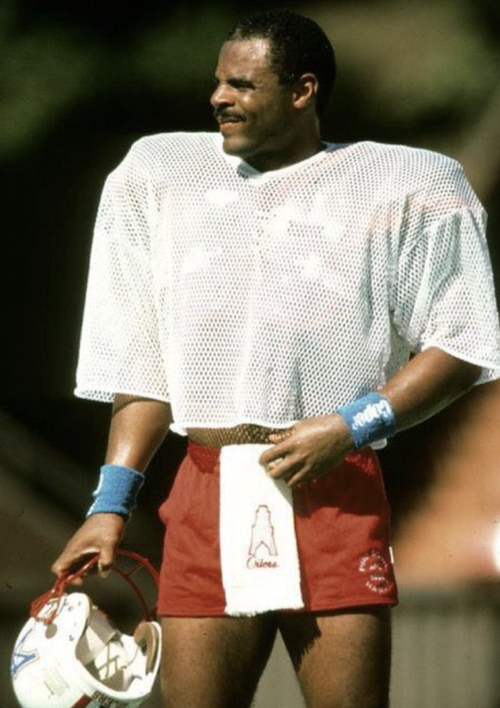 I'm a long-time fan of Chubbies Shorts. I smell a Footballguys Collaboration in the works...

Fortunately, not everyone laps up whatever the talking heads feed them. My buddy Heath Cummings with some pesky facts.

Here's a fun fact for your Monday afternoon:

They have the same number of regular season wins.

The idolization and praise of Kyle Shanahan in the absence of facts to support that kind of thing is one of the more fascinating aspects in all of sports. He does have cool hats.

Have to be honest. I didn't have Davis Mills as "Young QB to cause Bill Belichick trouble" this season.

I wrote last week I hoped Mike McCarthy was paid extra to wear this hoodie. Great cause. Terrible hoodie.

Peter King's column this week reminded us it could be worse. Ray Handley showing out on the sidelines in 1991... 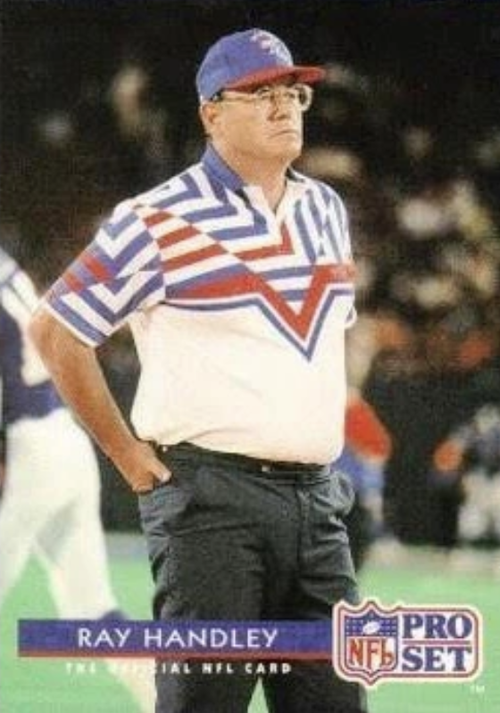 Seahawks punter Michael Dickson is a Footballguy. This was a smooth recovery.

In #LARvsSEA, the punt was blocked and recovered by the kicking team. The punter kicks the ball again from behind the line of scrimmage. This is a legal kick and the result of the play was the ball was ruled down at the 11 yard line. pic.twitter.com/saAYrCKlzp

Those frat-boy teasips in Austin are hardcore.

Although if you, like me, are from Texas, that's a pretty awful thing to say...

Most of us could relate to Charlie Brown Sunday afternoon...

Like most everyone else, I eye-rolled the idea LeBron James would make a great football player. But I'm starting to warm up to the idea.

The NBA will be proud. pic.twitter.com/V7fmFMJlrY 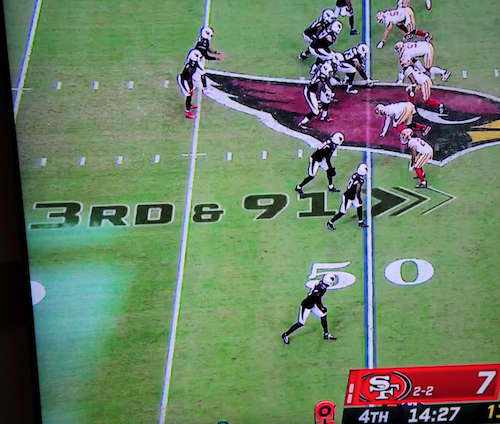 Thanks to Footballguy Daa for that one.

Except you probably didn't hear about it because it was Mayfield and not Patrick Mahomes II so it wasn't quite as "unreal" I guess. Even though it was the same play most people reading this could have made.

My friend Sam Monson pointed this out and I completely agree.

How do you lose track of a 6'4" 220-pound guy wearing a powder blue jersey with yellow lightning bolts?

If you've ever tried to pack everything into the car for a long vacation, you can feel the Falcons' pain here.

I'm with my buddy Paul Charchian.

Mike Zimmer is trying not to get COVID.

Braves outfielder Joc Pederson with pearls is the latest example of "When you deliver, you can wear what you want." 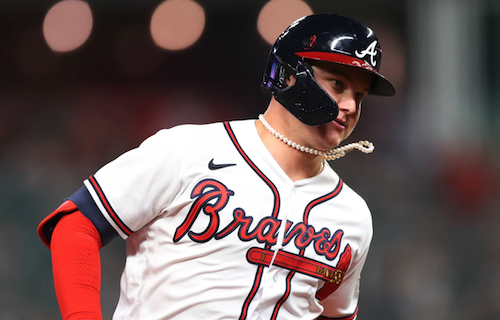 My friend Mike Clay summarized the NFL for us Monday night.

On 2nd down, Jonathan Taylor looks lost as a receiver.

On 3rd down, Jonathan Taylor catches a pass and takes it 70+ yards for a TD

Before the Alabama game two weeks ago, Ole Miss coach Lane Kiffin told CBS sideline reporter Jamie Erdahl to “get your popcorn ready” before his team went on to be destroyed by Alabama.

The next week, Ole Miss ran this promo.

Keep it Poppin' with @renasant! pic.twitter.com/1DYkmiZPcZ

That's how it's done.

One more baseball note. I mean, it is the playoffs. This is beautiful from Randy Arozarena.

What a jump. The ball is still in the pitcher's hand at this point.

The ball is still in the pitcher's hand. Look where Randy Arozarena is. pic.twitter.com/pX98IvMZdb

Music note this week: Band Of Heathens is a soulful bunch from Austin. You won't find them playing giant venues but they strike me as a band that loves what they're doing. I have several close friends in New Orleans and this song hit on some of that "still here" vibe. Enjoy.

I always hate to see an injury and I wish Russell Wilson a speedy recovery. But in the meantime, this is the hero Seattle needs...

The hero we need, Seahawks pic.twitter.com/dIx2AKTSll

You know Ndamukong Suh because he's a great football player. This is a much less known part of Suh but I think it's easily some of the most important work he's doing. He's a great follow on Twitter.

I came into some money at a young age.

Which can be a blessing, but it can also be trouble.

I made some mistakes, learned from the best, and ultimately found a formula for financial success.

Sunday night was one to remember for the #BillsMafia ðŸˆðŸ‘‰ðŸ‘ˆ #GoBills #Bills @BuffaloBills #pixelnfl pic.twitter.com/kiR2cycbea

I'm no defensive coordinator, but the Falcons are down Calvin Ridley and Russell Gage and putting a DE in single coverage on Kyle Pitts at the goal line is the play?

As if you needed more reasons to love Kyler Murray...

Thanks to Footballguy Matt Carey for that one.

Austin Ekeler tried to play it smart and not score but the Browns weren't having it.

I'm with my buddy Sigmund Bloom. This guy should carry the flag for the Eagles delegation in the Fan Olympics.

A caller on @WIPMorningShow just called from the hospital because he got so mad during the #Eagles game that he passed out from yelling.

Found out they won once he woke up

Says he will send the bill to Howie Roseman

How bad is the Chiefs defense?

On a per-play basis, the most prolific offense in NFL history is the 2000 Rams. They averaged 7.0.

BREAKING: Paul Brown Stadium adjusts goal posts for the remainder of overtime so that somebody can win the game pic.twitter.com/sjWKZ5cZXj

I see the suits on TV with their revelation that "JUSTIN HERBERT IS AN MVP CANDIDATE".

And it makes me think a couple of things.

1. Random Shots readers have been thinking this since mid-season of 2020.

2. Have these suits ever seen a website with betting odds? Um, yeah, Herbert is a favorite. They will be interested to know Josh Allen is really good too.

An emotional Dan Campbell talks about losing another heartbreaker: pic.twitter.com/Vgb4j2XMcd

I'm pretty neutral on Dan Campbell. Unlike many, I didn't go gaga on the macho bro bite the kneecap stuff. Whatever. But I do like the passion here for his players.

And one thing I loved that doesn't seem to be getting nearly enough talk in my opinion is going for two to win at the end as he did. I love that and wish more teams would try to end it when they can instead of taking the cover your butt route and playing for overtime. If you have the chance to finish it, you do it. Well done, Coach. And hang in there Lions Fans.

Matt LaFleur considered going for it on fourth-and-inches in OT rather than giving Mason Crosby a fourth chance at a FG but shared what led to the decision.

He asked Crosby: “What do you think?”

LaFleur: “All right, you got it.” pic.twitter.com/tl4jX6ChIL

You saw the game. Mason Crosby, one of the better kickers in the league, had missed three crucial field goals. Coach Matt LaFleur had to make the choice of going for it on fourth down or letting Crosby try again.

You know how this ended as Crosby walked out and calmly put it through the uprights.

Believing in yourself when everything on the outside is giving you (and everyone else) no reason to believe is one of the toughest things to do in life.

And let's be honest, it's easier to believe when one has a demonstrated track record of success, right? Mason Crosby believing in himself wasn't a reach. He's demonstrated over the years he can do this. But what about the rookie kicker or the shaky veteran who doesn't have that track record?

Or much more practically, what about you? We all have to work through these things and my one bit of advice is to lean towards optimism. One can get hippy-dippy in a hurry on this stuff but I'm a huge believer in your mind affects your performance. I've seen it too many times. So give yourself some grace and lean into positive outcomes here.

And a side note that gets lost here - I love how LaFleur handled this. Very often, we're not in Crosby's position but in LaFleur's. Where we're being asked to believe in a friend or child or spouse or co-worker. Like anything else, it's a balance, and you don't want to be rash or flip. But you also want to honor those close to you with your trust when you feel it's deserving. And here's another life lesson I'll offer: "Err towards over-trusting the people you love."

Washington, Team Mood and Players We're In or Out On