Why Austin Ekeler is an RB1 Bargain

A detailed analysis of Austin Ekeler's fantasy prospects for 2020.

Austin Ekeler has served as one of football’s most efficient producers over the past three years. And yet, in an offseason that saw the Chargers send Melvin Gordon III out of town, the fantasy world still seems unsure of whether to treat him as a fantasy ace. Ekeler may not be a prototypical workhorse back, but there’s still no reasonable argument against his RB1 status.

While playing tag-team with a healthy Melvin Gordon III, Ekeler has been ultra-dynamic, if not exactly predictable, from week to week.

Now, with Gordon gone, Ekeler is thrust back into the lead role. And unlike during Gordon’s tenure, there’s no clear Austin Ekeler type to siphon off a consistent portion of the load. Over his three seasons, Ekeler gave us a seven-game sample size starting in place of Gordon, with rotational guys like Justin Jackson and Troymaine Pope mixing in. Here’s the workload he’s been given in that role - a robust 74% of team snaps - and here’s how he’s fared with it:

Those are clear top-five RB rates; they extrapolate out to 1,589 scrimmage yards, 82 receptions, and 337.6 PPR points over a full season. That gives an idea of his upper-upper-tier upside as this backfield’s three-down leader.

Ekeler has shown to be a serviceable, if unspectacular, runner between the tackles, but what sets him apart is his pass-game prowess. Over his 3 NFL seasons, Ekeler has led all running backs with a studly 8.6 yards per target, and he’s caught 14 touchdowns over 43 games.

And behind Ekeler, there’s virtually no proven track record to speak of. Jackson has shown some dynamism in his limited, injury-riddled opportunities, and the team added Joshua Kelley in the fourth round of the draft. But neither looks like an Ekeler-type talent, and neither projects to cut much into Ekeler’s dominant pass-game role. He’ll cede a typical amount of time to his reserves but still boasts a worst-case floor around 250-260 touches.

The New Offense, (Probably) Same as the Old Offense

Some are playing wait-and-see on Ekeler due to the changing shape of the Chargers offense. Philip Rivers’ 16-year reign under center has ended, leaving Tyrod Taylor as a bridge to No. 6 pick Justin Herbert. Taylor was an abject disaster the last time he started - a three-game stint with the Browns in 2018 - and Herbert is widely viewed as a gifted but raw prospect. It’s fair to wonder about either (or both) struggling and handcuffing the whole offense, but even a backslide wouldn’t project to hinder Ekeler much. He’s a volume-driven RB1, and his value is less tied to touchdowns and late-game rushing attempts than most of his peers.

And Ekeler’s massive chunk of Anthony Lynn’s passing game looks perfectly safe. The Chargers brought in no new pass-catching blood of note, adding only a fifth-rounder (Joe Reed) and a seventh-rounder (K.J. Hill) in the draft. And in fact, they allowed veteran reserve Travis Benjamin to leave town. Lynn’s attack has never been very deep, utilizing four options and very little else: slot specialist Keenan Allen, field-stretcher Mike Williams, studly tight end Hunter Henry, and the running back rotation. That pool claimed a stunning 82% of team targets last year, and it’s still one of the most predictable groups on the draft board.

In other words, the Chargers could fall off a cliff offensively and still drive Ekeler to a top-10 finish.

Not a huge discount, but a helpful one

Here’s a snapshot of the ADPs for Ekeler’s general RB tier dating back to mid-June, per Fantasy Football Calculator: 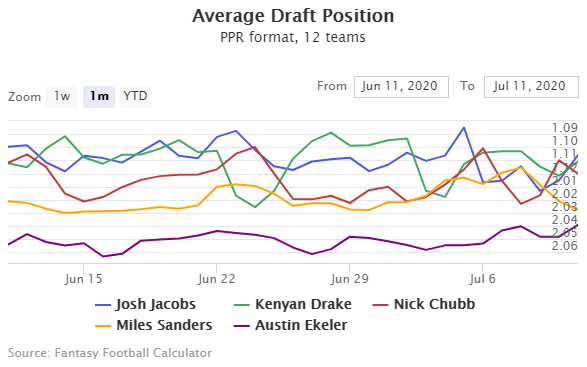 See that big, chaotic mess between 1.09 and 2.03? That’s the fantasy community trying to make sense of Nick Chubb, Kenyan Drake, Josh Jacobs, and Miles Sanders amidst a wild offseason. Early drafters are rolling the dice on guys with their own questions about usage and touchdown opportunity, and they’re not doing it with much consistency. How could they?

Chubb and Jacobs are both candidates for the 2020 rushing crown, and that’s not insignificant. But it’s hard to find first-round value in a back who doesn’t even catch 30 balls, and that may be a bridge too far for these two. Chubb’s receiving usage fell off a cliff as soon as Kareem Hunt made his 2019 debut, while Jacobs saw the Raiders re-sign their third-down back (Jalen Richard) and add an intriguing one (Lynn Bowden Jr) in the draft.

Drake and Sanders have been volatile, too, and with good cause. Both enter the year as clear-cut starters, but neither project to a dominant share of touches with much confidence. Drake just turned 26 but has yet to handle the ball 225 times in a season. Sanders was terrific down the 2019 stretch, but ceded plenty of snaps and touches to scatback Boston Scott - and the Eagles tried like crazy to bring in a veteran body in the offseason.

See the smooth, relaxed line below that? That’s Ekeler, sitting calmly at RB12 in PPR formats throughout the offseason. That comes a year removed from an RB3 finish in PPR leagues - and after a March that saw Gordon leave town. We know about Ekeler’s ceiling as a candidate to catch 90+ passes, but this shows what a stable floor comes with it. The rest of this tier can’t really boast that.

Ekeler won’t fall out of Round 2 in most drafts, so the discount from that messy bunch isn’t huge. But being able to pair him with a first-round wideout like Michael Thomas or Davante Adams is still quite a feather in one’s cap.

Ekeler isn’t a prototypical fantasy RB1. He’s diminutive at 200-ish pounds, and he doesn’t boast the 300-carry potential of Derrick Henry or Joe Mixon. And it’s always a leap of faith to chase pieces of a transitioning offense in early rounds of drafts. Still, the Chargers’ offseason suggests they like what they’ve seen in Ekeler as the lead dog, and there’s no reason to project otherwise. It’s safe to expect Coach Lynn to again feed him gobs of opportunity, both in space and in the traditional ground game. Even if Ekeler regresses a bit from his mammoth early-2019 pace, there’s so much dual-threat appeal here that both his ceiling and floor are strong for a second-round RB1 play.

Thoughts from Around the Industry

Ekeler gets a stamp of approval from the great Ian Allan over at Fantasy Index:

Ekeler was the 4th-best running back last year in PPR formats, and he did it despite sharing time with Gordon for most of the year. Gordon’s gone, so Ekeler should play more, handling the ball more often as a runner… To me, Ekeler looks like a safe choice. In PPR formats, he’ll be one of my first 10 backs.

We weren’t quite sure what we were going to get out of Ekeler during Gordon’s holdout, but he exceeded even the loftiest of expectations… with Gordon completely out of the way, our numbers love Ekeler and anticipate him to repeat as a top-10 fantasy back.

RotoBaller’s Michael Florio also notes Ekeler’s concerns - how much will play, and how much will he play on the goal line? - but also walks away with a high-ceiling, high-floor feeling:

There are concerns that come with Ekeler. But there are concerns that come with most players outside the obvious elite high-end picks... the one thing no one is questioning is just how good and efficient Ekeler is, especially in the passing game… To me, Ekeler is an RB1 that you barely have to pay an RB1 price to acquire. Going off the board as the RB12 is much closer to his floor than his ceiling.