Pro tip: When trying to rank the NFL teams, start by noting the Titans beat the Bills and lost to the Jets, then give up and go find something better to do

I'm going to leave this one right here...

If Kyle Shanahan coached the Panthers, Christian McCaffrey would have been a Game Time Decision leaning towards playing. I get Real NFL / Competitive Advantage and all that. But thank you, Matt Rhule.

Jacksonville! We could probably do the entire column on this game.

The Jaguars went five games without making a field goal. Or winning a game. That seems like a difficult thing.

Their kicker, Matthew Wright had been with the team for three games. He was a software engineer six weeks ago.

Wright nailed a 54-yarder with 3:40 left in the game to tie the score. Then hit the game 53-yard game-winner as time expired. Because, the NFL.

And the 54-yarder featured one of the sweetest draws you'll ever see.

I’m not going to blame Kevin Harlan who initially called it no good. You can see the ball here circled. HT: TotalProSports.com 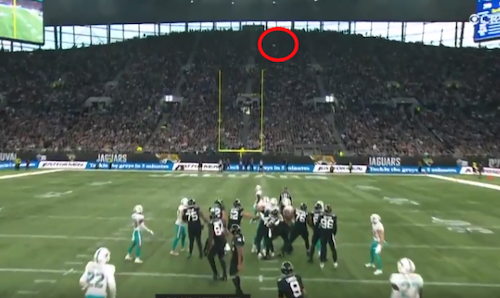 Urban Meyer is now undefeated when not coaching in America pic.twitter.com/mLwFL98rQm

Whatever you may think about playing games in London, the fans there do it right.

On the note of London Games. I wish they'd have them every week. I'll take the two worst teams in the league playing real football any time over the half-hour of "You Got MOSSED" on the other channel.

I'm also confused. Jacksonville was outstanding at the end of the game crisply executing the play to get the first down and stop the clock with a surprising throw to the middle of the field. Then quickly gathered and made the game-winning field goal. It's interesting as Twitter assured me the entire coaching staff was totally incompetent...

Patrick Mahomes II' mom gets her fair share of eye-rolling. Much of it she brings on herself. But I agree with her here.

After Tyreek Hill mishandled a pass from Mahomes that was intercepted, she tweeted:

Ok PEOPLE that should not be an interception on the QB… that should be a fumble or anything else.. just putting it out there.. GO CHIEFS..

I'm with her. I've long said we should judge quarterback passing like baseball errors. If a receiver bobbles a good pass and it's intercepted, that should be on the receiver, not the QB who did his job. In the same way, if a quarterback throws a bad pass and the defensive back drops what should have been an interception, that should count against the quarterback. I know some folks are tracking this now but I wish it were more mainstream. Maybe that's the next Footballguys project...

Music Note of the week is Flume and Chet Faker. It's comfortable and chill and just fun. Plus the breakdance/ballet video is cool. Kick back and enjoy.

I need to see the rest of Mike Tomlin in this photo...

Two of the best coaches in the league square off in Pittsburgh for @SNFonNBC. #SEAvsPIT pic.twitter.com/dRQNWTeqMQ

I fully admit I have selfish reasons for pulling for certain teams. The never-ending supply of content from Cowboys fans when their team is good is one of them.

Serious Question: Have we reached a point where quarterbacks are too good?

Joe Montana completed 63.2% of his passes during his career.

I'm not saying we need to change anything. The NFL product each Sunday is incredibly compelling. But I do think it's worth noting how the game has changed dramatically in the last few years. Show me the best quarterbacks in the league and I'll show you the best teams in the league.

On that note, Pete Carroll: 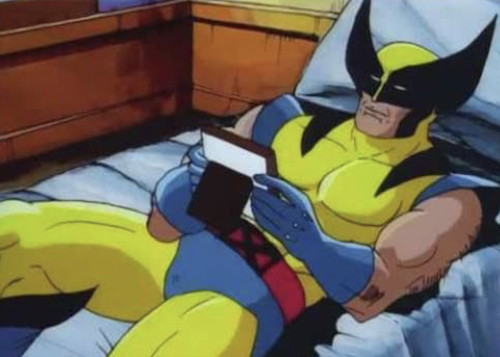 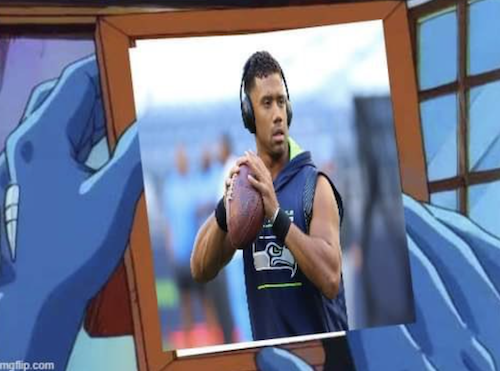 And the Vikings win another close game.

I don't even know this NFL anymore.

Troy Polamalu doing his part for the Steelers crowd. He traded his Terrible Towel for a Seattle fan's Seahawks jersey.

.@tpolamalu just made a Seahawks fan trade in his jersey for a Terrible Towel ðŸ˜‚ðŸ˜‚ðŸ˜‚ðŸ˜‚ pic.twitter.com/PmmZ8zRHMr

T.J. Watt's taking punching the ball out to the next level.

A thought on mistakes.

I see people roasting Tua Tagovailoa for this interception.

Sure, it looked terrible, but the mistake here was obviously miscommunication. I don't know if it was Tagovailoa's fault or the receiver's fault but it's pretty obvious what happened. This wasn't a bad throw. Twitter would have you believe he missed his intended target by 30 feet. That's easily fixable. The mistake where a pass is three feet off the intended target is way more troubling.

Aaron Rodgers said he saw a lady throwing him the double bird.

Aaron Rodgers on what prompted him to yell what he did after his rushing TD: “Sometimes you black out. In a good way. I’ve definitely blacked out from a concussion, which isn’t a good way.”

Adds he saw a lady giving him the double bird in the front row. pic.twitter.com/nK6EZHaboO

When #Packers QB Aaron Rodgers was asked postgame about his “I still own you!” comments to the #Bears crowd, he said: “Sometimes you black out on the field... I looked up in the stands and all I saw was a woman giving me the double bird"

Well - there were many of them. pic.twitter.com/hFMD7cvhwO

I love this kid.

The McQuaid sophomore lineman suffered a leg injury and then pretended to DRIVE THE STRETCHER as he was carted off the field.

This kid is my new hero. pic.twitter.com/nrJu7oOM0l

College Football Note: I think they should set the rankings based on Las Vegas odds. Cincinnati at #2 is as much a joke as Iowa was.

I propose all games everywhere ditch the coin toss and do like these guys with Rock, Paper, Scissors.

The Milwaukee Journal Sentinel has all 35 Bear QBs here.

Because I know you need to know this kind of thing.

If you know me, you know I love BBQ. And for me, and I'm admittedly biased as I grew up there, the best BBQ in the world is in Texas. Texans take their BBQ seriously and we take our rankings seriously as well. Texas Monthly is the definitive source for BBQ rankings and every few years they come out with a new list. It's out this week and it's a pretty big deal. Enjoy.

The fact I have no idea what this means makes it better.

Baltimore Ravens DC Don Martindale on #Chargers QB Justin Herbert, “He’s one of those guys who could throw a strawberry through a battleship.”

This guy blocking is definitely a FootballGuy.

If I'm Jerry Jones, I get a Madden Video Game Expert and pay him to do nothing but be in Mike McCarthy's ear telling him when to call timeout.

Derrick Henry reached a top speed of 21.8 mph on a TD run last night... the fastest top speed of any ball carrier this season.

Derek Carr is on his fifth head coach.

Note to DK Metcalf: You might want to drop this one… 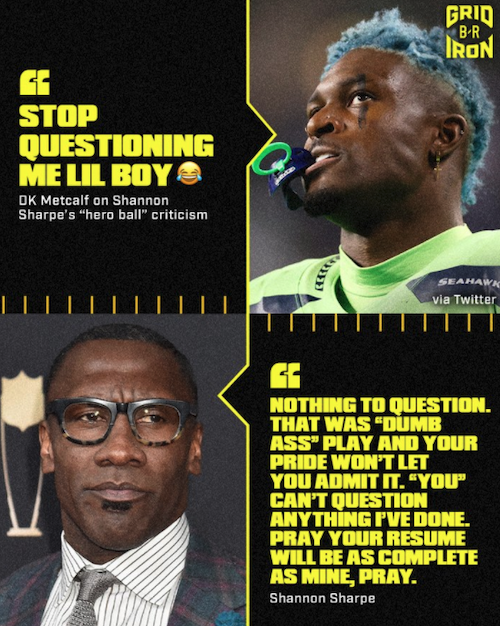 Closing with this one.

Adam Schefter shared this from the Cowboys this week. "Cowboys’ QB Dak Prescott has been writing "Ask 4 Help" on his wrist tape as a reminder to those living with mental illness that their lives matter and they are not alone. Prescott has been open about his own experiences with anxiety and depression in the past." 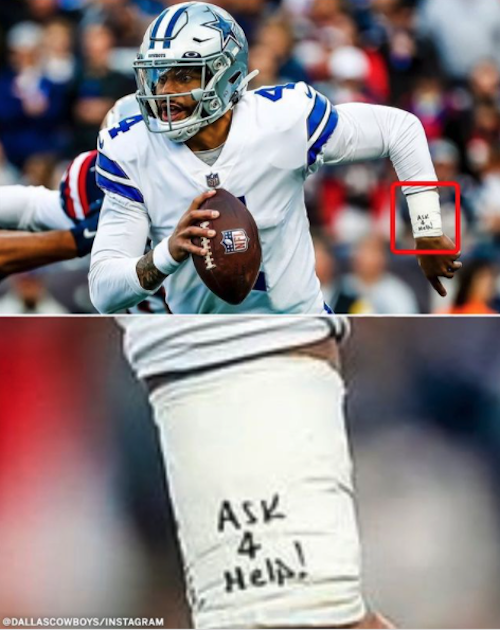 It's a simple message.

And spot on. If you're having trouble, ask for help. We do pretty well in that area when we're young and in school. If we're stuck on homework or a project, we ask for help. I'm not sure what happens but as we get older, we seem to do less of that. There are a ton of reasons why people don't ask for help. I'm here to say most of them aren't good reasons.

Especially when it's something like needing help with mental illness or suicidal thoughts or things of that nature. It's ok to ask for help. Ask your friends or parents or neighbors or pastor or co-worker or pretty much anyone. Email me if you need to. Google "mental health help" and you'll see a ton of resources. Sites like SuicidePreventionLifeLine and others are there. The main thing is to ask for help. You don't have to do this alone.

And for those of you who don't need help, let others know you're there. It only takes a second to let people around you know you care and if they need something in this area to let you know.

This all goes back to the thing you've heard me say a lot here. The Ram Dass quote of "In the end, we're all just walking each other home at night." If you need help getting home, ask. If you're able to help, be the person who walks someone home.

Washington, Team Mood and Players We're In or Out On