I find this new version of Josh Allen so seductive and yet I can’t quite put my finger on what exactly it is ðŸ¤”
GoBills ðŸ˜‚ðŸ˜‚ https://t.co/Vf84zP9p78

This might be the best thing Odell Beckham Jr Jr. has done this season...

Beckham has a history with Thriller.

Here's a thought and it's one of those "Chicken Or The Egg?" things.

Remember when teams were hiring young offensive minded coaches because they wanted the next Sean McVay? Well so far this season...

Brandon Staley, who was McVay's defensive coordinator, is 4-2. pic.twitter.com/X2fXkkTh1d

I'd add another layer: I've noticed these young offensive-minded coaches look smarter when they also have a good quarterback...

ESPN's Adam Schefter reported CeeDee Lamb has been fined five times for a total of $46,865. Including multiple fines for not tucking in his jersey. 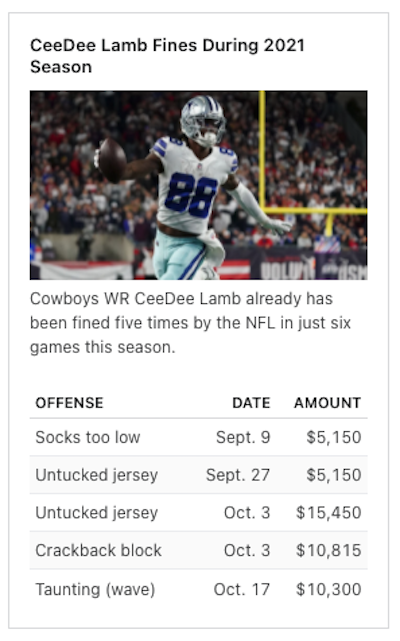 I know it's cool to go all John Bender there but at some point, you just play football and tuck the jersey in...

Then went on to this.

You already know who was getting the game ball... pic.twitter.com/Bq4PQ2tvLm

Jordan Elliott would be suspended for the season if he hit Patrick Mahomes II like this...

Probably for life if he did that to Tom Brady.

Oh, and Chris Long is right.

If you’re wondering how you’d fare playing in the NFL, it’d look like the Boswell play.

The Browns just got revenge for the time Antonio Brown did this to their punter. pic.twitter.com/bMDfl9FRE2

Joe Mixon hops up from a tackle that would put most humans in the hospital.

The Bills got it going eventually but struggled early.

What we expected from the Bills offense vs. what we are getting. pic.twitter.com/9ffMTtCpGv

Back to Odell Beckham Jr Jr and Thriller. It's just that time of year.

The Colts mascot, Blue, was every Indianapolis fan Sunday.

Watch for the Titans' game-winning kick.

Stay for the Colts' mascot slamming its head into the goal post ðŸ˜‚pic.twitter.com/AH4R4cVzHE

I'm with Clint Lamb, this Alabama team was ridiculous.

Finally. An answer for what happened in the Cardinals-Packers game.

Found out what happened to AJ Green pic.twitter.com/XwVdF2SSHp

How to scare Tom Brady...

Because I know you folks need to know this kind of thing.

Cowboys also have the only pass TD where passer's LAST and receiver's FIRST were an exact match: Andy Dalton-Dalton Schultz in Wk 11, 2020 at MIN

"Next time the Cowboys play the Vikings they’re somehow going to manage a touchdown from two players whose first and last names are both reversed.

"Not sure how they’ll pull it off. Sign Cameron Jordan after he’s a cap casualty in New Orleans, entice Jordan Cameron out of retirement, and then run a trick play?

"Details are fuzzy but the trend is inexorable."

Hang on. I thought the Steelers sucked?

My new favorite thing is all the talking heads struggling to understand how Pittsburgh's record is so good but they score so few points.

Can someone explain to them the game isn't scoring points?

The game is scoring more points than the opponent.

Like everyone else, I love offense. But the disrespect to defenses is getting out of hand.

From Steelers Depot: Ben Roethlisberger talked about poking fun at coach Mike Tomlin and the USC coaching rumors. "Now we do our things were like to screw with Coach T. I think we were going to play the USC song in our warmups but I think that got ditched pretty quickly."

"So the Saints were relying on (Trevor) Siemian, who’d completed three passes in the last four years, to stay upright, to move the team with not much of a chance to run the ball, and to somehow score more points in the last three quarters than Tom Brady, who is only on pace to throw for 5,631 yards with 53 touchdown passes this year."

If you had Trevor Siemian throwing a TD Pass to Alex Armah on your bingo card, check it off now

JUSTIN FIELDS ARE YOU SERIOUS?! #DaBears

Carson Wentz gave up a costly pick-six against the Titans.

The internet did what the internet does and reacted with mostly "OMG! LOLZ! WHAT WAS HE DOING?!?!?!?"

Anytime you give up a pick-six it's a terrible play. Everyone agrees on this.

But for most folks, "What he was trying to do" was obvious. He was about to take a sack two yards deep in his end zone with 1:30 on the clock in the fourth quarter in a tie game on first down. A safety there probably ends the game. He was desperately trying to do whatever he could to avoid the safety. How that was apparently baffling for some folks was fascinating.

I can't imagine many things tougher than playing defense in the NFL in 2021.

Mike Hilton goes low to stop Ty Johnson on 3rd and long. Johnson ducks into the hit, draws the helmet-to-helmet contact, and the Jets get the first down on the ensuing penalty

— Christian D'Andrea probably does not own a brewery (@TrainIsland) October 31, 2021

Tom Brady had some interesting thoughts on the game today. As someone who's played "in the old days", he's uniquely qualified to talk about the differences. From NBCSports.com:

“The game that I played 20 years ago is very different than the game now in the sense that now it’s more skills competition than it is physical football. In some ways, they’re taking away a physical element of the game.

“This is an example. The onus of protecting another player is now on the opponent as opposed to on yourself. So, for example, the 600th touchdown pass I ever threw in my career was to Mike Evans. Ten years ago, I never would’ve thrown that football because . . . the safety is standing right there and the safety essentially can’t hit him the way that he used to be able to hit him. All the safeties now are 200 pounds and they all cover. There’s no Rodney Harrison. There’s no Ronnie Lott. I can go on, Brian Dawkins. There’s a lot of players like Ray Lewis that I didn’t throw the ball against between the hashes because Ray Lewis was gonna knock [the receiver] out of the game. Not because he was just gonna make a tackle.

“I think the onus of protecting receivers should be on the quarterback. Not on the defensive backs. The onus of protecting a running back should be on the offensive linemen, not on the tacklers who are trying to tackle the running back. I don’t believe in cheap shots. And I don’t think cheap shots should ever be allowed. But if you are a professional athlete, it’d be like being in a boxing ring and saying, ‘Don’t hit your opponent too hard because you might hurt him.’ If I said, ‘Look, we’re both able to protect ourselves, we can protect ourselves. I’m looking at you. You’re looking at me. Let’s go.’ That’s the element of the physical sport that I really appreciate that allows you to develop and grow.

“I think so many quarterbacks I know, they run through the middle of the defense and they just probably know that in that sense, they’re not gonna get hurt. I see Carson Wentz do it all the time. I see Daniel Jones do it all the time. I’m in my mind, I’m thinking, ‘It’s crazy. The defensive players are running, they all jump out of the way of the quarterback.’ That’s not how I learned. I slid in Buffalo late. [Cornerback] Nate Clements knocked my helmet off—literally knocked my helmet off. It incited their entire sideline. You know what I learned after that play? Man, you better slide a lot faster than that.

“The reality is, you develop a lot of bad habits because we’re not being taught the game that you’re out there to protect your teammates . . . That physical aspect of the game—there’s so many players in the NFL Hall of Fame because they were physical players. I’m not saying they played cheap, they played physical. That’s a big difference. And I think now, we’re taking physical players out of the game and now it’s a skills competition. We [quarterbacks] still get beat up. We still get hit. It’s very different, though, in the fact that a lot of quarterbacks are throwing the ball into areas we shouldn’t throw it. They penalize defensive players for it. You can’t penalize a defensive player for doing his job. I think an aspect they should think about is how that impacts things going forward. It turns into seven-on-seven football.”

Full disclosure. I'm a capitalist. The market decides value and I don't begrudge people earning what they're worth.

But I'll be honest. I have a friend trying to take his son to his first NFL game in Dallas and they're looking at paying for "Standing Room" tickets that are several hundred dollars each.

And when I read this, the whole thing feels like it kind of sucks.

I know the NFL is King. I benefit from the NFL being King. But the customer has a limit. Please be careful, NFL.

The bye week opens as a 13.5-point favorite over the Lions.

Music Note This Week is a Random Shots regular. The Strumbellas are chill and fun. They're not too serious. They're just right.

Thanks to Footballguy Chris Wautel for that one.

Be careful out there.

Ben Roethlisberger had a pretty good answer for Myle's Garrett. 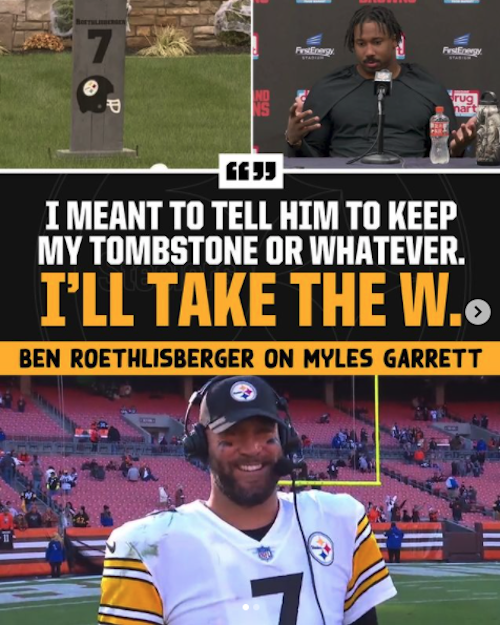 Congratulations to the Braves on a World Series Win.

On that baseball note, I'll wrap with one of my favorite stories. And one I tell here often.

Heading into the last day, a doubleheader, of the 1941 baseball season, 23-year-old Ted Williams' batting average was .39955. He could have sat out the meaningless last two games of the last day and his average would have rounded to the hallowed .400 mark. 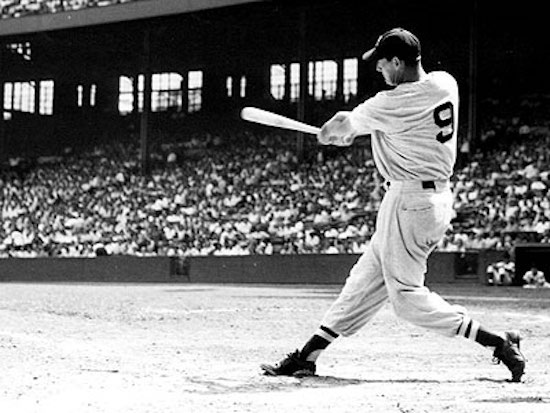