I hope you had a great Thanksgiving. And I hope this was not your Thanksgiving dinner experience...

And thanks for all the kind well wishes to me and my family. Much appreciated and we had a sweet time. You folks rock.

4th and goal. Kirk Cousins lines up under his guard. pic.twitter.com/pSLh2YFdAb

Running back Alexander Mattison could see it unfolding and did what he could to help.

Afterward, Cousins said, "Just got under the wrong guy."

I could probably wrap this one up right here.

Side note - Comeback Of The Year is easily Drew Brees' hair.

Tony Romo had fun with the overtime coin toss.

Which got me thinking. Do the players get to decide what to call?

Mike Glennon getting the start because of someone else's neck should be the most ironic thing I read today.

#Giants QB Daniel Jones is considered week-to-week because of his neck strain and backup Mike Glennon is now expected to start Sunday against Miami, sources tell me and @RapSheet.

Acts of kindness by Aaron Jones.@Showtyme_33 stopped by to give a young #Packers fan some awesome gifts ðŸ™Œ via @packers pic.twitter.com/qFXpSAKGYy

Dallas game in one picture.

“Today, I want to give thanks to all the quarterbacks that throw my dad the football.”

This is the real strength of Tom Brady. He works hard and he's smart. But lots of QBs are smart and work hard. Brady has the advantage of a massive mental database of reps on the field plus talent plus a great team. And he's taken great care of himself. That's a strong combination.

Even with his back turned to the defense, he already knows the coverage.

So much for my theory about picking games based on how sharp the players dress pregame...

Cowboys by a million

My favorite part of the Ohio State-Michigan game was that middle school standoff in the tunnel.

Ohio State and Michigan in the hallway pic.twitter.com/RYz1vGzm6d

My second favorite part is the Ohio State helmets where Coach gives them the little sticker apparently for every day they show up to practice.

The Dolphins faced Joe Flacco in Week 11. They got Cam Newton last week (at least for a while). Maybe Eli Manning can come back for the Giants game this week.

Lots of talk about coaches leaving jobs. I'm all for people being paid the money they're worth. I'm a capitalist. But I also get there's more to it than just money. Especially with coaches. This isn't like the free-agent relief pitcher going on the market to the highest bidder. By definition, a coach is a relationship builder investing in the player's lives. It's complicated.

Find a coach that looks at his players like Matt Campbell looks at his seniors. #Cyclones @CycloneFB @weareiowa5news pic.twitter.com/pFbktW3hdh

Does any darling team have more media excuses made for them than the Rams? Aaron Rodgers with a broken toe out there juking Jalen Ramsey on a touchdown run and all the talking heads were fawning over the valiant efforts from a "beat up" Matt Stafford and Odell Beckham Jr.

Who's with my friend, Kyle?

Hey Kyle, how many players have you drafted or picked up this year that have landed on IR? pic.twitter.com/eSOO0JLUwI

There are lots of things I don't understand.

But why every player doesn't wear a mouthpiece is high on the list.

Vea wasn't getting much sympathy from his coach.

#Bucs HC Bruce Arians on Vita Vea losing a tooth: “I don’t care. He’s got 30 other ones.” pic.twitter.com/WReFOEadMt

The Steelers have held 9 of their 10 opponents under 30 points this season.

The Bengals have scored 31 points... in the first half.

It's still early of course, but thus far Odell Beckham Jr appears brittle and underwhelming. I'm shocked. I mean who could have possibly seen that coming?

Maybe let's dial back that "Cam Newton is a CHEAT CODE" talk for a minute.

Now that's how you throw the challenge flag.

Thanks to Footballguys Clayton Gray and Jordan McNamara for that one.

Music Note Of The Week is an old favorite. John Craigie is the epitome of West Coast chill.

"You tried to drown your sorrows

"You shouldn't have taught them how to swim

"And now you are right back where

California is a great song.

The time of year where agents for college football coaches change their names to "sources."

Jalen Ramsey and the Oh for November Rams could neither stop nor contain Aaron Rodgers.

I've been a Roethlisberger apologist but I think it's finally time in Pittsburgh.

The Steelers when they have to move on from Big Ben pic.twitter.com/NOv3MuR5tl

For context. This was Roethlisberger when he was younger. 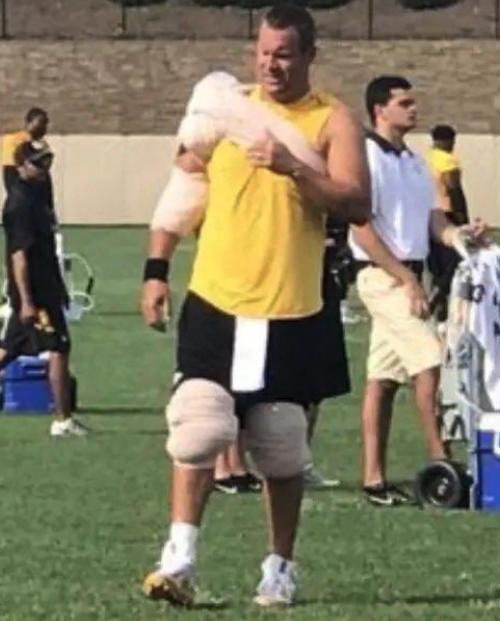 Aaron Donald in Green Bay last Sunday. I'd be frustrated too if I got all the hype for being a physical defense and then got pushed around for 40 minutes.

Uh oh. The Patriots may have some receivers...

Baker Mayfield's had his troubles recently. But this seemed cool. He waited a long while for his friend Lamar Jackson to finish his interview so he could say hello. Friends are important.

Baker Mayfield waited for Lamar Jackson to finish his interview to greet his friend after their Sunday Night Football game. pic.twitter.com/VI6dGT1YRc

Aaron Rodgers has three pick-6s in his entire career.

Matthew Stafford has three in the last three games.

Recap of the Browns-Ravens game.

FOX ran an "NFL EMERGENCY ALERT" about the Eagles being back. Funny, but not great timing before the Giants game.

Not as fun is they're now apparently in trouble with the FCC for not being serious enough with Emergency Alerts.

This is why we have to put "Do Not Eat" on the box of Tide detergent pods.

Thanks to Footballguy Bruce Henderson for that one.

Obituary of a 76-year-old Pittsburgh-area man says he passed away "after a long bout with the Steelers."

“Wayne Olexa was at his home with family when the Steelers went into overtime against the 0-8 Lions and that was all he could take."

49er full back Kyle Juszczyk tried to leap over half the Vikings team Sunday.

Believe in yourself like Kyle Juszczyk believed he could leap over four defenders from the five yard line.

Juszczyk with the perfect reply.

The key is to believe ðŸ˜‰ https://t.co/TFmjFleWWr

I know that sounds goofy but I'm completely convinced he's right. Success takes all kinds of things like talent and effort and work and perseverance and determination and much more. But it starts with belief. Believe in yourself. And here's another angle I mentioned a few weeks ago with Matt LaFleur and Mason Crosby: Don't be so hesitant to believe in others. Don't be reckless, but don't hesitate to be "that person" for someone who needs some support. Sometimes people believe in themselves because someone else believes in them. Be that person.

Thanks to Footballguy Phil Alexander for that one.

Deebo Samuel Is Elite, No Matter His Role