This article will break down how to build a dynasty football team.

The building of a dynasty team is an art form. As a fantasy manager, you have to consider a variety of details when building your team: skill, opportunity, ADP values, age, sleepers, potential busts, and league scoring. If you are just starting in dynasty, it can be a lot to handle and is one of the reasons why many managers stay away from the format altogether. My mission is to make those decisions more manageable for you and provide you with draft strategies you can use this off-season. There’s a lot of information out there that tells you specific players to draft but not strategies that will allow you to build a sustainable dynasty roster for multiple years. The strategy that best allows you to create that sustainability in dynasty leagues is anchor running back, sometimes called “hero running back.” It’s a modified version of the zero running back strategy that many analysts have made famous over the past decade. Let's dive into why anchor running back is the correct choice for building a dynasty roster.

What Does Anchor RB Mean?

Essentially, the anchor running back draft strategy involves you drafting one running back in the first two startup rounds and then stacking other positions until rounds 8 through 10. Your typical dynasty league settings will include a 12-team Superflex with PPR scoring. For those that may not be familiar, Superflex allows you to start another quarterback in a flex position. With those settings in mind, in this strategy, you will be drafting a quarterback and running back in the first two rounds of the draft, then looking to fill out the other positions. The essential guidelines for this are understanding player values and how much they will outscore their peers at their position. This is something that our founder of the site, Joe Bryant, has pointed out for years with his Principles of Value-Based Drafting. Before we dive into values and the difference at the position, let's look at the ideal anchor running back.

What Is The Ideal Anchor RB Profile?

The first question you need to answer is just what we are looking for when it comes to an anchor running back. This asset needs to be drafted in the first two rounds, but more goes into it than just that strategy in dynasty. Remember, by not selecting another running back until the later rounds; you’ll need to find one with longstanding value for at least three seasons. With that in mind, you should attack dynasty drafts with the idea that you should contend for three-season intervals. This means that your anchor running back at most should be on your roster for three seasons and you should always trade them before they sign their second contract. One reason for that is the running back age cliff is a real phenomenon. Let's take a look at the charts below.

Looking at the charts, you’ll notice very quickly that the ideal age target for the running back position is 23. You can find a suitable asset at any age under 25, but you’ll want to ride their peak production only until age 25. After age 25, you will need to get them off your dynasty rosters. That is a non-negotiable part of this strategy. It is better to be a year too early than too late with running back values so you can get a proper return on investment. Here’s a list of running backs that fit the age profile:

Now age isn't the only attribute you need to consider when searching for your anchor running back. You should be looking to draft a running back who received Day 1 or Day 2 draft capital. He needs to have tested well athletically and should have a 40 time under at least 4.6. Volume is also king. Volume is how many targets and carries a player will earn each season. One way to find the information quickly is to sign up for a Footballguys subscription and use their draft tools projections. There is no one out there that does it better. You need to look for a running back in line to receive high volume within his offense, particularly the amount of RedZone touches they receive. You should also be looking for a player that has above-average receiving ability. In reality, most leagues now use some form of PPR scoring, so you need to have a running back that can catch passes, and the ideal number of receptions should be around 40 in a season. For reference, you can see the top pass-catching running backs in the league last season in the chart below.

*Graphs were provided by Statmuse

As with every strategy, these are just guidelines, and there will always be outliers. However, if you follow these guidelines, you should find a running back that will score around 280-300 fantasy points in a season, barring any unforeseen injury. Now that you have your running back guidelines let's dive into team construction.

Remember that you only need to start two running backs in most leagues, and the rest can be wide receivers or flex options. Taking advantage of positional requirements and flexibility allows you to optimize your total points scored, which should be the ultimate goal in fantasy football. If we're using the parameters that we set above for league settings, my optimal start in any dynasty league is:

As you can see from the strategy, you should be perfectly fine with waiting on your RB2 in drafts. The RB2 in my starting lineup will always be my weakest player, but with the difference between RB12 and RB24 only being 3.0 fantasy points per game, that is something you can live with based on ADP. In reality, in Rounds 2-7, the gap in points scored by running backs and wide receivers is always going to be in the wide receiver's favor, and that's where we find our value. Just look at the top 24 finishes from both positions below. 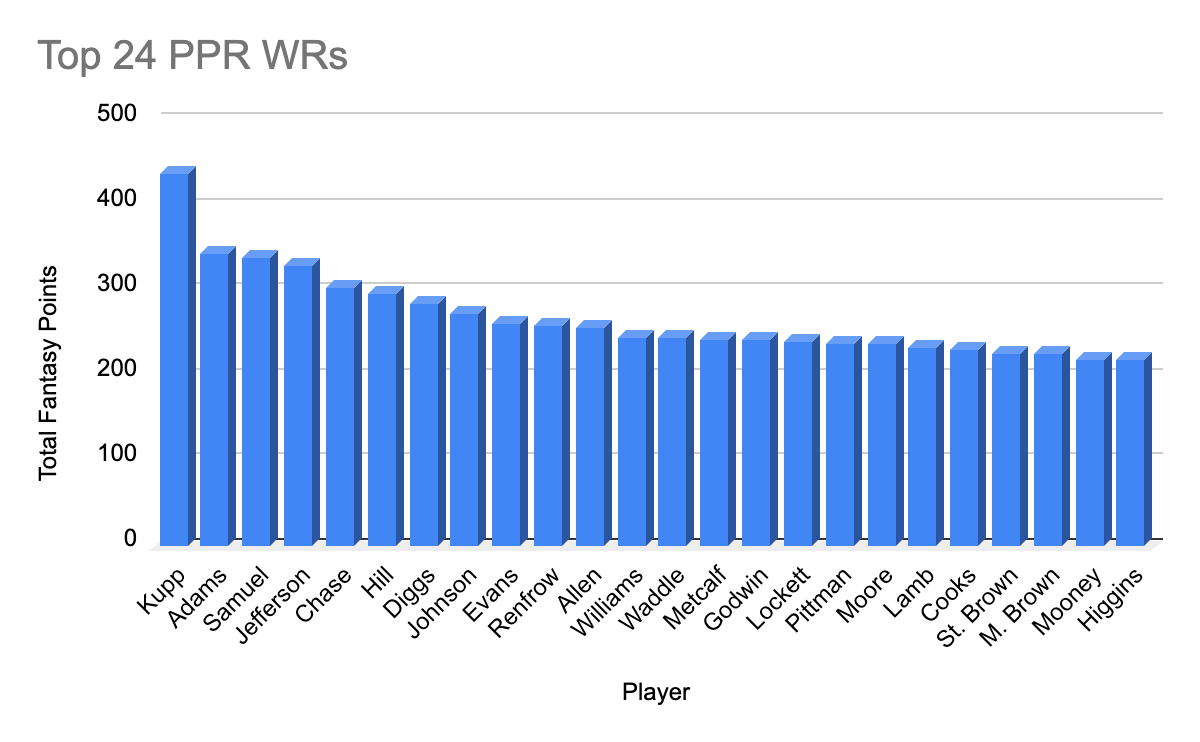 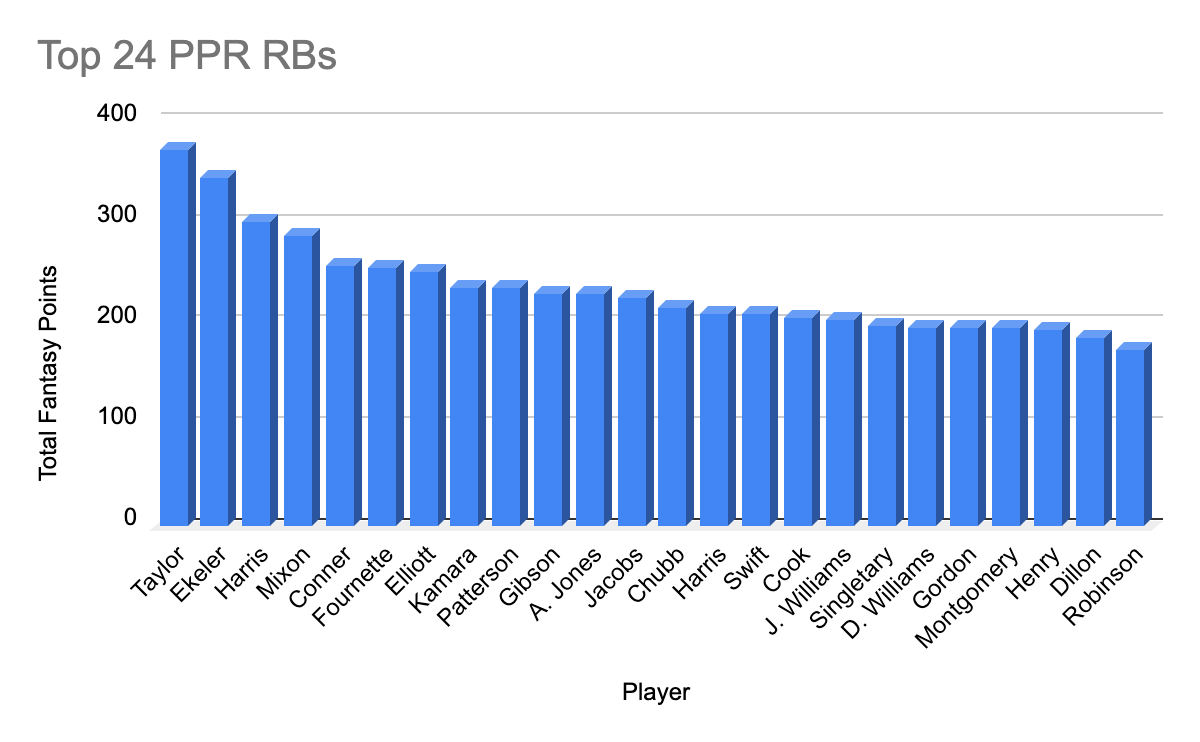 *Data was provided by Fantasydata

As you can see, every Top-24 wide receiver would go on to finish with over 200 fantasy points, with WR24 Tee Higgins coming in at 219 FPTS for the season. He averaged 15.6 FPTS per game. If we compare that to the RB24, James Robinson, who finished with 173.9 FPTS for the season and averaged 12.4 FPTS per game, there is a noticeable difference. That is where you can exploit player values and beat your opponents. There is always a running back dead zone between rounds three and eight in startup dynasty drafts. Imagine drafting Mike Davis in Round 5 last season instead of Cooper Kupp! Drafting Chase Edmonds ahead of Tee Higgins! Drafting Zack Moss ahead of Deebo Samuel! These are actual picks that happened last season based on ADP, and that's how you lose leagues. Not to mention you put yourself in a value hole that is hard to make your way out of. Drafting second and third-tier running backs in those rounds should never be your goal. Especially when players like James Conner and Cordarrelle Patterson had much later ADPs and were able to finish as Top 12 RBs for the season, imagine getting one of those players with your anchor running back. That's how you win your leagues, and those options are out there every season. The point is to stop reaching on running backs in those rounds. Now let's talk about those ever-important dynasty values.

One of the most essential skills you have to master in the dynasty format is trading. A dynasty roster needs constant attention and turnover. The age cliffs in dynasty are real, and if you don't get ahead of the curve, that's when rosters can plummet to obscurity. This is why you implement the anchor running back strategy. While running back values change drastically, we don't see that with the other positions. For reference, many top analysts have already placed Breece Hall in the top ten of their dynasty rankings, and he hasn't even been drafted yet. While Christian McCaffrey, who is only 25, is out of some analysts' top 12 lists. If you want to go further back, think of what happened with Ezekiel Elliot’s value since 2020. In 2020, he had a first-round ADP. In 2021, he had third-fourth round ADP. Now he’s finding himself in rounds eight and nine. You lost value each season that you had Elliott on your roster.

On the flip side, the wide receiver position tends to hold values longer, leaving your roster with more flexibility on the trade market. Not only will receivers hold value they are also more likely to breakout and offer real value as WR2s and WR3s moving forward. While other managers deal with injuries or backfield committees at their running back position, you are gaining positional edges at different positions that allow you to win matchups. Then when they get desperate, you can take advantage of them in trade negotiations. Dynasty is a value game, and this strategy allows you to gain an edge over your opponents.

While there is no perfect strategy, this strategy is the most effective in creating dynasty teams that can win now and be sustainable for the future. As you move through your startup draft, be sure to look for backup running backs that you think have a chance to take over a starting role in case of an injury. They are incredibly cheap in startups and will provide you with depth at the position. They are also easily replaceable, and you can use your FAAB on breakout running backs that always pop up during the preseason and regular season. An anchor running back strategy in a startup draft can be advantageous if done correctly. You should jump into a few mock drafts to familiarize yourself with the strategy and player’s ADPs. Once you’ve done a few mocks, you should have a clear list of players on your target list. In total, you should have five anchor running backs that you are comfortable drafting in the first or second round. Accompanying that list should be individual draft grades that give you appropriate ranges for each to be sure not to reach on the selection. Once you are ready, jump into a real dynasty draft and go win your league.

Everything Season Long and DFS for Week 14