This is Random Shots, and it's a few pages of me downloading my brain that gets stuffed with way too many random items from too many hours watching, reading about, and listening to football every weekend and throughout the week. It's the only way I manage. Here's hoping it has some value for you.

With the NFL season kicking off Thursday night, I was feeling like this throwback picture of Jimmy Johnson. It's the same way every year. 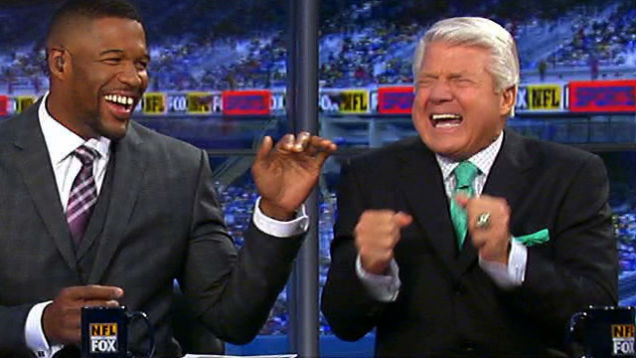 Another year. Another draft in my beloved local league, THE LEAGUE. And yes, that's the trophy and my friend Casey in our advertising. 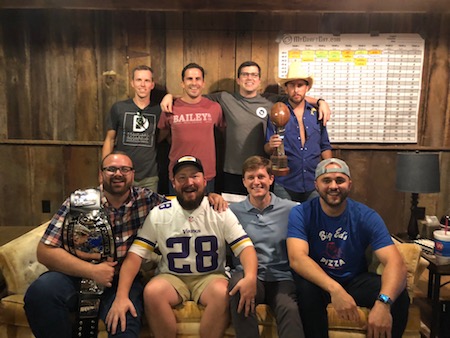 I love the big fantasy football contests. I love the FFPC High Stakes leagues, and I love our Footballguys Players Championship with a $500,000 Grand Prize. Nigel Eccles, co-founder of FanDuel is a good friend and I'm an early investor in Underdog. I love all that.

But the regular local home league has always been and will always be the backbone and foundation of fantasy football for me.

And therefore, it'll be the foundation and focus of Footballguys. The smack talk, community, and camaraderie are the heart and soul of this industry, and it'll always be at the forefront of how I think of Fantasy Football. All the other ways to play are great. But they're all in addition to the local league.

Friends enjoying each other and enjoying football always has been what I love about Fantasy Sports. And yeah, this is what I said last year. My guess is I'll say it next year too. The big stuff is fun. But the local league is where my heart's at. And where Footballguys will be.

Be on the lookout in the Footballguys Merchandise Store for our "Draft Local shirts". It's what I love. And where I'm steering Footballguys.

If a fantasy football season were 9 seconds like this video, we're about half a second in. But so far, this feels pretty accurate.

Still one of my favorites this year. Make sure to have the sound on.

A fantasy football season in 9 seconds...

The "Leonard Fournette is so fat he might get benched" talk from this summer seems like a long time ago...

You know it's coming. But it still hits you.

The octobox is so beautiful pic.twitter.com/PTz6jLvHnf

Rams were forced to use a silent count at home on opening weekend.

The NFL is back.

As a D'Andre Swift fan, this hurts.

Jamaal Williams when D'Andre Swift gets near the goal line... pic.twitter.com/qK5huA2sLR

2022 Celebrations off to a strong start.

We had a drawing and picked a random Footballguys Premium Subscriber to co-own a team with me in the FFPC Main Event. Grand Prize is a cool 1 million dollars and the winner from the drawing gets to have all of anything we win. I love this.

Had a blast drafting with my new friends Brian and James. Brian was the winner to co-own the â¦@FFPCâ© Main Event team with me. He gets whatever we win. He was an awesome draft partner! pic.twitter.com/oSjZBszxmc

Can't say I saw this coming.

Music Note of the Week is an old favorite. John Craigie to me is the picture of California Chill. As the weather starts to turn a bit more cool, this song hits me in all the right spots. So good.

Be careful what you wish for.

Jaire Alexander: "Put me one-on-one in man vs Justin Jefferson!"

"Life moves pretty fast" is a regular line for me. From one of the best movies of all time...

It's especially true of the NFL.

This was from Monday after the Week 1 opener. 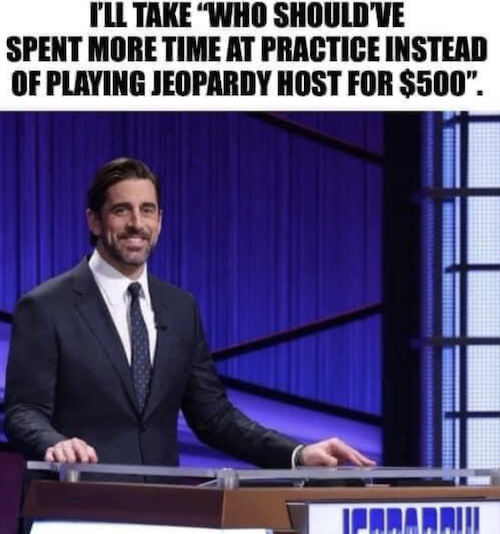 It's easy to forget the Packers were blown out in the opening weekend of 2021 and looked awful.

Maybe True Detective is more apt than Ferris Bueller on this one...

Although there's some truth here.

It's been a rough week for Nebraska. But congratulations to former USC head coach and now Georgia Southern's coach Clay Helton on a big win in Lincoln.

The answer to "Who will Nebraska hire next?" seems obvious.

It's time to bring him home...

There's a clear choice for Nebraska's next coach - someone who knows grain and has brought a championship to the Great Plains.

It's time to bring him home pic.twitter.com/cbE1VF4s2L

Amidst the screaming about who's an idiot or who should be fired after the Broncos - Seahawks game, this was a sweet moment.

And this might be the line of the week.

For everyone out there who's been overlooked or dismissed or written off, Geno Smith is your guy.

"They wrote me off, I ain't write back though."

I can't say I've ever thought, "I'm just not seeing enough of the Mannings on television".

But this kind of brotherly back and forth is good.

Shannon Sharpe was talking about how the fans receive a player returning to play against their former team and asked Peyton how it was going back to Indianapolis.

Eli quickly jumped in, "He was cut."

Eli Manning made sure everyone knew Peyton got cut ðŸ˜­ pic.twitter.com/NpUpUYDaFg

It's fun in real football too.

I and many others noted Sunday night how Tampa Bay's Leonard Fournette made a great block on Micah Parsons.

Now go watch the tape! And see what happenned when it was me and him one on one!!! You hit someone not looking you straight pus**y !! Stop hyping this weak as* shit it’s football!! ðŸ˜‚ðŸ˜‚ https://t.co/ITprQ4ECRg

Meanwhile, Tom Brady thinking about the next time Tampa might play Dallas...

During the construction of an irrigation canal, an upstream contractor reported that a dog had been swept away. A brave unnamed construction worker who rides and successfully rescuesðŸ‘ðŸ‘ðŸ‘ pic.twitter.com/pizrtjdbcc

You probably saw the Kansas City game where kicker Harrison Butker injured his ankle and safety Justin Reid stepped in to make an extra point and then boot the kickoff through the uprights.

Here's a bit more behind-the-scenes video. My favorite part was how calm Reid stayed. He asked his coach for the kickoff, "You want me to send it out of the endzone?" Before the extra point, Reid and holder/punter Tommy Townsend dialed in their celebratory handshake before they went in.

This behind the scenes video of safety Justin Reid kicking for the Chiefs is awesome. pic.twitter.com/2a3AeGWXco

I'm fully aware there's no more sensitive group of people in football than Kyle Pitts fans, so this might be unwise. And I know Marshon Lattimore is amazing.

But I'm just going to drop this fact right here from my friend Ryan McDowell...

The Seahawks had three different TEs that scored more fantasy points than Kyle Pitts in Week One.

Who says the NFL isn't artsy?

Thanks to Footballguys Adam Harstad and John Lee for those.

This is what a compliment looks like from Mike Tomlin.

Mike Tomlin on Jaylen Warren making his NFL debut on Sunday: "he didn't urinate down his leg, that's a great place to begin."

I love the Old School guys.

Thanks to Footballguy Keith Overton for that one.

Tuesday morning Twitter was mostly, "OMG OMG, you can't pay Russell Wilson $250 Million and kick it on 4th and 5!!!"

There are lots of reasons why Nathaniel Hackett should have let Russell Wilson try to convert on 4th and 5. But Wilson's salary is not one of them. You make the call that gives you the best chance to win. No matter what you're paying them.

Formula 1 Racing has subtitles. I had no idea.

This will forever be the funniest thing I’ve seen pic.twitter.com/72aC3wj0Nh

Ok, that's funny. But Muaaz Mia needs to get out more if that's the funniest thing they've ever seen.

My sweet 81-year-old Dad is awesome. Still sharp as a tack. Most of what I know about business and service, I learned from him.

He doesn't really do much internet stuff and doesn't fully understand our business. But he's proud of me and what we've built here. He loves it that his friends think Footballguys is cool.

He's not much of a sports fan but will casually watch a game here and there.

Dad: "Dang. That quarterback from Buffalo is something. Man, oh man. You're on that kid, right?".

Chicago cornerback Jalen Johnson said they beat San Francisco and Trey Lance because "We made him play quarterback".

This one will be interesting to watch.

The 49ers, of course, will say resigning Jimmy Garoppolo had nothing to do with their confidence in Lance.

And one more reason to be nice to your significant other.

The way Alvin Kamara called for the ball here still cracks me up ðŸ˜­ðŸ¤£ pic.twitter.com/b0Id6j13gG

I don't think I've ever seen this called before.

"Unsportsmanlike conduct. Chicago, #16. Brought a towel out on the field during the dead-ball period and wiped the field down. By rule that's illegal."

"Best player in the game today." - @AaronRodgers12 to @JJettas2 pic.twitter.com/nuAwuTc2r7

Mark Stoops walking out of the swamp. pic.twitter.com/Y1O1sWRFzq

I love Justin Herbert clapping and yelling, "Let's go team!" way more than I probably should.

Geno Smith: 17-of-18 for 164 and two touchdowns in the first half. This game of predicting fantasy football will keep you humble.

Also, things usually even out.

Geno in the first half vs the second half pic.twitter.com/WRD6N3IC2i

You know some cornerbacks around the league were sharing this tweet Monday morning...

There probably won't be any obituaries bold enough to mention that she dressed like Cam Newton pic.twitter.com/6NlNBRNUvs

On a serious note, Andrew Sullivan wrote this after the Queen died.

I'm trying to write a column and I find myself in tears. I fear that everything she exemplified - restraint, duty, grace, reticence, persistence - are disappearing from the world.

Full disclosure. I've never understood the fascination with the English Monarchy. But that's beside the point. And I know she obviously wasn't the political leader of the country. That's beside the point as well. She was a prominent and powerful public figure and, by most accounts, exemplified the traits Sullivan described: restraint, duty, grace, reticence, and persistence. I won't say they're disappearing from the world as that makes me sound older than I am. But I feel like they're a bit less common than they once were. Especially among people of influence. Let's make those more common. Let's celebrate people who bring those traits to the table. Thank you, Queen.

Thanks to Footballguys Keith Overton, John Lee, Adam Harstad, and Clayton Gray for the help on this one. If you've got a Random Shot of your own, send me an email at bryant@footballguys.com.

Thanks for playing along, and I hope you make the most of whatever you're doing in your life. Love your neighbor and stick together.