In the early rounds, aim for the target, not the bull's eye.

That's advice I've been giving readers for at least a few years now. It's rooted in years of observation and experience building successful fantasy teams and others sharing their draft plans. One of the most common things I see from fantasy GMs during the summer is the Draft Plan Email. It goes something like this:

I'm an avid reader of your work and want you to tell me what you think of my draft strategy. I have the 8th spot in a 12-team league and in Round 1 I'm taking either Player X, Y, or Z. In Round 2, I'm taking Player P, Q, and R unless player X, Y, or Z falls to me.

Let me know what you think? Am I missing anyone? Am I valuing Player Q too highly here?

We try so hard to be right about the fruit of one tree that we forget that we're trying to cultivate a grove of winning succulence. This is why rankings suck. I'll get back to that later, but hold that thought: Rankings suck.

I've had Rookie Scouting Portfolio readers ask me why I'm low on Johnson because I have him as the No.39 player in my long-term build cheat sheet for my dynasty rankings.

He's 2021's No.12 fantasy wide receiver in PPR formats. He's my No.17 wide receiver on my long-build cheatsheet. Not a big difference, considering that Johnson just recently added a regimen last year to shore up dropped passes that I want to see him continue applying to his game and we don't know who will replace Ben Roethlisberger next year in Pittsburgh. Will he be a refined talent or a rookie? Will that passer have a rapport with Johnson? Will the offensive line improve?

The 16 receivers ranked ahead of Johnson on my list also have the youth-talent combination, a good quarterback, a proven production track record, and/or offensive stability. The No.15 WR in that tier is Davante Adams, who may inherit a bad quarterback when Aaron Rodgers leaves. The same could be said for Nos. 16-17 Tyler Lockett and D.K. Metcalf.

What if No.17 DJ Moore gets stuck with Cam Newton for another year or Terrance Marshall emerges and earns a role that cuts into Moore's opportunities? Rankings don't show these potential ranges of outcomes as clearly as we'd like.

Rankings suck. They offer little context. Tiers with rankings can also suck but they are more helpful because they visually provide helpful context if you understand how to use them and build a productive team.

For example, the RSP Dynasty Rankings have 8 tiers and well over 400 players. Tiers allow you to group players from different positions and give readers a visual understanding of how I value them:

Using Johnson as an example. He's the No.17 receiver in Tier 3. The top 3 tiers are reserved for players I think will consistently merit starting spots in fantasy lineups. Considering there will rarely be players in Tier 1, Tiers 2 and 3 are players I believe will deliver to early-round expectation or offer great value if Average Draft Position affords you a chance to wait until later.

There are 45 players in Johnson's tier.: 23 receivers, 12 running backs, 6 quarterbacks, and 4 tight ends. Again, my top tier is empty right now. The only tier above Johnson's is the Elite Tier and there are only nine players in it.

This gives you context that Johnson is easily a top starter with reliable WR1 or WR2 talent and because he's 15th in this tier and 17th overall among receivers, he's a legitimate fantasy starter capable of another 2-3 years of WR1 and WR2 seasons.

The problem is that many of you want to specifically want more pinpoint value: top-5, top-10, top-12, top-20, or top-24 seasons. Sure, that would be nice but it's unrealistic. I've been showing some research I did for the RSP pre-draft publication for the past three years when discussing the biases of draft capital that apply to this point.

Here are the 12 best wide receivers based on who has the most fantasy seasons as at least a top-36 fantasy producer. This covers wide receivers joining the NFL between 2008-2016. I haven't done 2017-2021 because it's too early to examine their classes specifically. 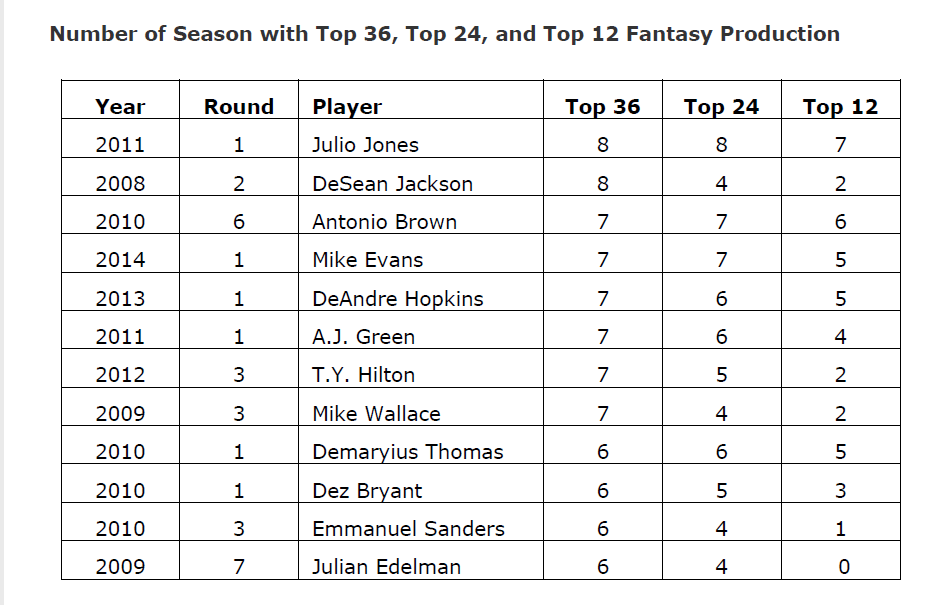 Other than Julio Jones, Antonio Brown, Mike Evans, DeAndre Hopkins, Demaryius Thomas, and A.J. Green, there aren't any receivers from the sample who have been "set-it-and-forget-it" fantasy WR1s for 4-6 years. If limit expectations to 2-3 years of WR1, that gives you three more options. While these six have careers that often went on during the same span as each other, their trajectories mostly occur at different points so good luck presuming you'll hit the WR1 bull's eye every year with your first two receiver picks in fantasy drafts.

This chart also reinforces why there's a flaw in the bull's eye mentality of placing too much weight on a specific player in the early rounds of drafts. It's hard to be a top-12 receiver year after year, even if the receiver has delivered to that expectation once. 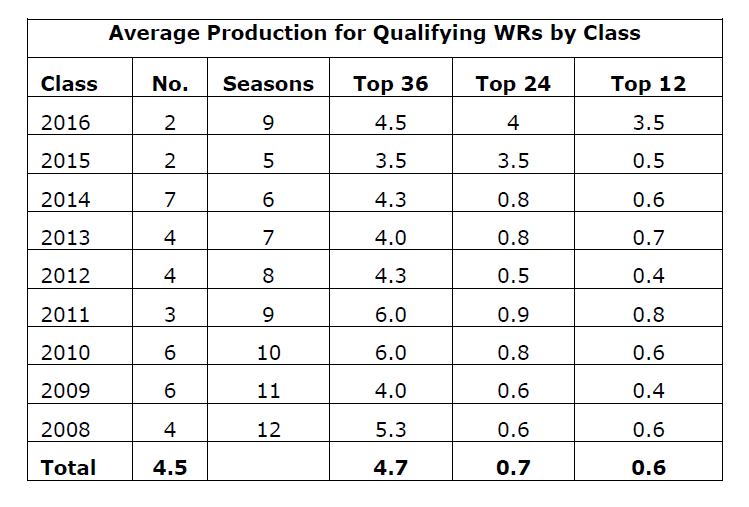 We focus too much on the bull's eye rather than hitting the target. As a result, we aren't as flexible with adjusting to developments in drafts and we lose out on chances to accumulate a lot more talent.

It's why I also no longer care about ranking analysis sites. It's a nice idea in theory to give a reader an opportunity to see who does well with rankings. But the algorithms lack a great way of showing the weight that specific outliers can truly have on building a successful team. There are multiple ways to build a strong team through the draft but the methodology for ranking analysis inadvertently influences analysts in our industry to "rank to the test," so they can earn that seal of approval from the industry and readers who think they've discovered Consumer Reports for Fantasy Analysis.

I've had my rankings high on those lists in the past. It felt good, but I realized that it can lead to "play it safe" behavior. It also homogenizes the views of the community. While there's still value to readers to see who gives you the safest rankings, it's one tool and that tool has limitations like everything else out there.

Tiers give the reader more perspective on the ranking and help you hit the real target: Earning the most valuable starters you can acquire for your lineup and bench. Sure, there are many anecdotal instances where one player exceeds expectations and delivers a league-winning year. Peyton Manning's, Patrick Mahomes II', and Drew Brees' record years; Derrick Henry last year and Jonathan Taylor this year; Cooper Kupp this year; and Rob Gronkowski's dominant year in New England.

But as you can see, it's difficult to project the bull's eye. When I recommend players who have the potential to hit that elite bull's eye — Tom Brady this year — I'm recommending the player because even if he doesn't hit the bull's eye, he'll still be a value where you targeted him. Brady is the No.1 QB right now and has a 10-point lead on Josh Allen. Brady's ADP was QB9. Allen was QB2. Considering where you could get Brady, even if you reached 2-3 rounds, he was still a value compared to Allen, Mahomes, Rodgers, Kyler Murray, Lamar Jackson, and Russell Wilson, Dak Prescott, and Justin Herbert.

Recommending Bull's Eyes is great when falling below expectation still generates value relative to their ADP. Otherwise, you're building teams with little margin for error.

Let's go back to Johnson and the value of tiers. If you see Johnson as a top-12 receiver for the next 2-3 years and I have him 17th in my rankings but he's in the same tier as all but the 2 best receivers on my board, then the ranking shouldn't matter as much to you. When you draft, you know that you have 45 players capable of starter production and 23 of them are receivers.

If you think Johnson will produce like a top-12 receiver, you can build your team with him as that pick and use the rest of the tiers with the help of Average Draft Position to get as many options from the highest tiers as you can. Now, if you think Johnson is elite and I have him outside of the elite tier, then that's where one of us has vastly over or underestimated the player's value.

If a set of tiers tests your view on a player and you still believe you're correct, great, stick with that viewpoint if you can truthfully say you've done the work to arrive at that conclusion (film study, historical analysis, projections, etc.). If you're right, congratulations. If you're wrong, congratulations, you're one step closer to improving your process for the future.

After all, I would have never evaluated Patrick Mahomes II or Lamar Jackson as well as I had if I didn't get Dak Prescott wrong. I'm not talking about where Prescott was taken because everyone got him wrong based on production to draft capital. I'm talking about the process I used for evaluating quarterbacks that had flaws that Prescott's evaluation highlighted for me and help me address for the future.