It was a long week but finally, all is right again in the world and Lamar Jackson has resumed his normal status on talk radio as the greatest quarterback to ever play the game.

Life lesson: I'm less interested in being right than I am making it right. Meaning I don't always have it right to start. But if it's not right, it's my job to make it right. Adjust and adapt and all that.

The NFL got it wrong on the new idea of enforcing the taunting penalty. Please adjust and make it right.

I live in Tennessee and Dolly Parton is our patron saint. Her example of this was renaming a feature at her park a few years ago.

Dolly for the win. pic.twitter.com/Zi9ziDGVjH

Here's a cute kid. You could have given me 100 guesses as to which NFL personality this was as a child. 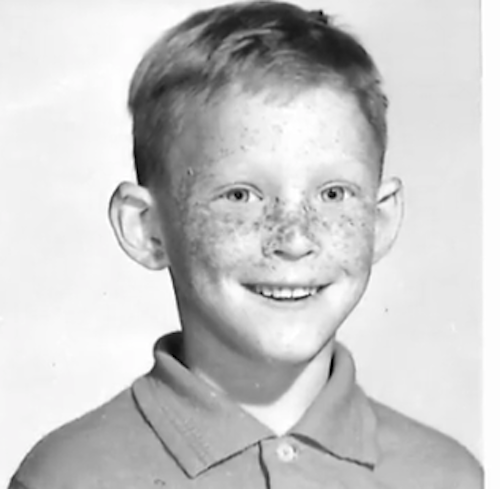 And I don't think I would have guessed Mark Davis.

On that note, I'm 100% with Jon Gruden at the end of this clip. Surely we have better things to do than make fun of someone's hair.

I like this guy. He gets nothing but ridicule and this team is pretty good.

I've seen enough. It's time we start talking about Derek Carr as a fringe QB1.

Matt LaFleur with this week's lame "Ice The Kicker" move. This one was especially juicy as he did it in the first half. LaFleur called time as they snapped the ball for Detroit's Austin Seibert who promptly pushed it right. Seibert said thanks for the practice kick and then made the next one when it mattered.

Justin Herbert was making sure his coach got a game ball.

This is awesome, Justin Herbert ðŸ‘

Not going to lie. I was hoping for more of these...

I'm just going to leave this one right here...

As you may know, we lost legendary Rolling Stones drummer Charlie Watts this summer.

My favorite Watts story as recounted in this sweet tribute from The Ringer.

"Mick and Keith and Charlie are in Amsterdam. 1984ish. Mick and Keith are still up at 5 AM. Charlie is not. Mick calls Charlie and says, “Where’s my drummer?” No response. Charlie gets out of bed, showers, shaves, puts on his suit, and goes up to Mick’s room, where he punches him in the face and says “You’re my singer.”

So much for that "If defensive backs could catch they'd be wide receivers" thing...

DJ Graham intercepts this pass with ONE HAND ðŸ”¥

Thanks to Footballguy Clayton Gray for that one. And fun note from Footballguy Dan Hindery: "It was ruled an interception on the field and Oklahoma challenged it. Since it was 4th down, the interception actually cost them over 20 yards of field position compared to if it was incomplete. They lost the challenge."

Because I know y'all need to know things like that.

To their credit, Sean Payton and the Saints didn't use this as an excuse. But this seemed insane to me.

Note for USC: Next time do not put all the linemen at the back of the plane.

USC just arrived in Pullman WA for their game with Wazzu. Here’s their plane… Half the team was still on it tooðŸ˜³ no explanation yet… pic.twitter.com/3lwvChstEA

Monday night was a great example of how sometimes football is like a stacked deck. Jared Goff can play. This touchdown to T.J. Hockenson was as perfect as you'll see by any QB/TE in the league. 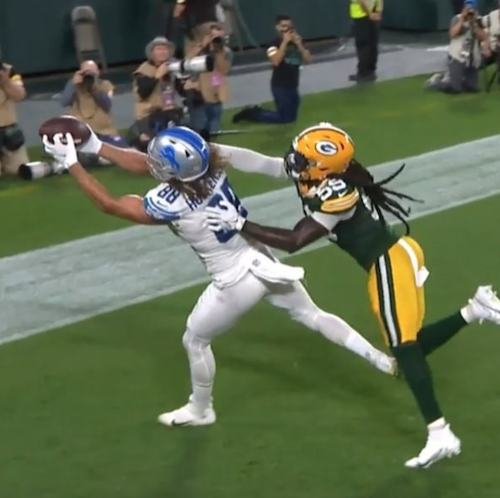 Goff and the Lions simply didn't have enough of these plays. And eventually the Packers prevailed.

You've probably seen Peyton and Eli Manning with the Monday Night alternate broadcast. I wasn't sure it would work but turns out I was foolish to doubt the insatiable desire fans have to lap up anything the Mannings put out.

Having them do the Ole Miss - Tennessee game is a can't miss home run. Even former UT coach, now Ole Miss coach Lane Kiffin is lobbying for it.

Do the right thing, ESPN.

It doesn't last forever, but for a while, kids think their dad can do anything.

My sons—watching @K1 highlights turn around and ask

“Dad, when you played is this how fast you were”?

Music Note of the Week. Some R.L. Burnside music may be what you need today. That's often the case for me. He had a wild and eventful life with a great many ups and downs. He served time in prison for murdering a man. Years later, he opened for the Beastie Boys and played on Conan O'Brien's show. Random Fact: Burnside's headstone reads, "R. L. (Rural) Burnside".

Someone please tell Tedy Bruschi no.

My hope for you.

I hope you find someone that loves you like Derek Carr loves Darren Waller.

The RedZone channel was down for ten minutes Sunday.

People were subjected to the unspeakable horrors of actually having to watch a real game. Some are still shook.

Twenty years ago, in Week 2 of the 2001 season, Mo Lewis knocked Drew Bledsoe out of the game giving Tom Brady his chance. Zach Wilson was two years old that day. Mac Jones was three.

Thanks to Andrew Siciliano for that one. 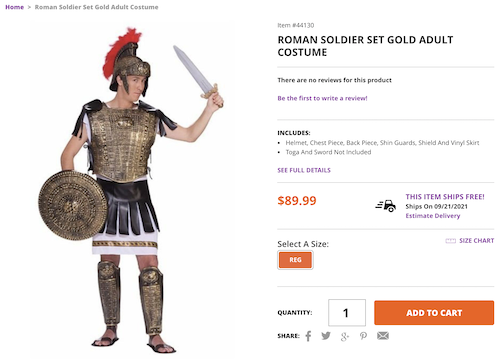 I'm no expert. But this seems like a sub-optimal thing for an official to do.

Official tossing ice on the field like a Mario Kart obstacle pic.twitter.com/929u2aaKNn

Worse News: He has no incompletions. pic.twitter.com/D81rf9Ogk6

Even worse news. It went downhill from there.

On the upside, the list of quarterbacks Bill Belichick has made look bad is a long list.

Thanks to Footballguy Klaus Krauthan for that one.

Kyle Brandt is right. Week 1 Is A Liar.

Jon Gruden was ready to get back to the game. I'm not sure I got the lip reading right, but feels pretty close.

Jon Gruden was unhappy with Mike Tomlin arguing the call. I think he said something like, “Hi Fellas. What do you say we resume play?” pic.twitter.com/QsmzI3o3hu

Probably not the smartest move to spit in a player's face when you're six inches away from the official.

Looks to me like Trai Turner spits at the Raiders toward the end of this replay pic.twitter.com/lvO0F1kGuC

The Cowboys-Chargers featured the first 14-11 halftime score in NFL history. If you're keeping score at home, that's a Scorigami.

And if you don't know Scorigami, you should. This is right up the Random Shots alley. Check it out here.

Some of that "Indisputable Visual Evidence" for overturning the Julio Jones touchdown. 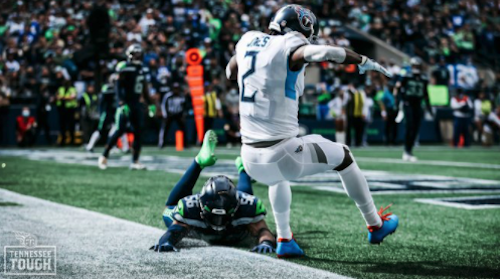 I'm with our friend Adam Levitan. Selecting a running back in the first round of the real NFL Draft is risky business.

There have been nine RBs drafted in Round 1 over the last five years. Could argue all except CMC were egregious picks.

Careful though. I said on Twitter last Thursday I was starting to think Saquon Barkley didn't look special and it nearly broke the internet.

Note to Eagles coach Nick Sirianni: At this point, people are more surprised if they don't run The Philly Special...

Apparently only Nick Foles can make the Philly Special work.

The #Eagles try it on 4th down and fail.#49ers were ready.pic.twitter.com/qWuRpDDm3o

The problem with playing in multiple fantasy football leagues.

Finally checked my scores this morning.

I need D’Andre Swift to score over 11 points and less than 9 tonight. Good times.

Matt Prater's in field goal range when he steps off the bus.

Disclaimer. I have zero interest in celebrities. Including athletes. Literally none at all.

But this is interesting and well-done writing. For you folks that like long-form stuff, I bet you'll like it.

"Owen Wilson Is Doing Great, Thanks" 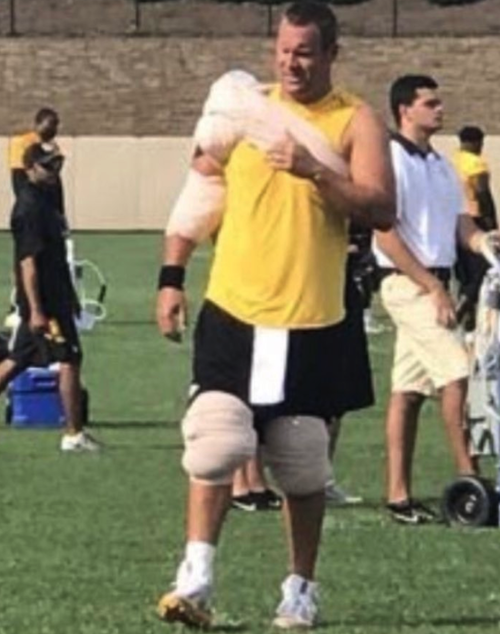 Poor guy is just trying to fix a helmet and Kenny Golladay won't stop yelling at him...

He may not be an elite running back. But Jamaal Williams can be on my team anytime.

I am a big Jamaal Williams fan after watching this. pic.twitter.com/HMay6ZgoqW

Wrapping with this one. Listen to this high school football coach.

Just had a young man come in before practice and quit, and I couldn’t be happier! pic.twitter.com/P0zsmbUQzU

Wise words from the coach here. And it applies to all of us. Don't live your life to please other people. Work hard. Do your best. But do that in working towards a goal or something that makes you happy. Not everyone else.

Thanks to Footballguys Keith Overton, Klaus Krauthan, Dan Hindery and Clayton Gray for the help on this one. If you've got a Random Shot of your own, send me an email at bryant@footballguys.com.

Allen Robinson is Poised for a Bounceback