Matt Waldman participated in a super-flex dynasty auction draft last weekend and shares his strategy, picks, and commentary on the event.

I love Auction drafts. Winning consecutive championships in a "fantasy experts" auction league is a personal highlight of my fantasy GM career. I don't get to participate in auction drafts as often as I'd like, but when I do, it's fun to share my strategies. Even if you don't participate in auction drafts, I don't dedicate a lot of time specifically to dynasty leagues and super-flex formats in this space so I thought this was the perfect time to do so.

It also gives me a great opportunity to highlight the fine work that Drew Davenport does with auctions. Here's his latest in a series on Mastering the Auction that includes Beginner Mistakes, Attacking Beginner Auctions, and Beginner Preparation.

If you discover as Davenport gets deeper into this series that I break some a lot of Davenport's guidelines, welcome to my style of drafting.

Straight-forward for a super-flex format. The makeup of the league is mostly football analysts with significant scouting, playing, or X and O's background but not fantasy analysts (at least from my knowledge of the group, apologies if I'm wrong here). Footballguy Mark Schofield and yours truly are the exceptions.

I prefer a flexible approach to drafts. A popular beginner maxim with Auction Drafts is to wait as long as possible to win bids until you have enough capital to control the auction and win productive players at a great enough value to collect a roster with a lot of strong talent. Another is to go with "Studs and Duds," outspend the competition early for three to five top players and wait until the end of the auction to fill in the remainder of your roster with low-cost options who hopefully outplay their value.

The dynasty format adds another layer of choices: Long Build or Win Now?

Knowing that most of the competition in this league is made up of analysts who scout the game or play in a lot of dynasty formats, I decided to roll with a win-now strategy. I have partnered with a lot of these GMs to create video work and I know at least half of the league are Rookie Scouting Portfolio subscribers, so I am at a disadvantage with targeting rookies.

I also don't believe in tanking. To each their own, but I don't agree with the sentiment and strategically, you're relying on a high hit rate with scouting. I work hard at scouting players, but from a fantasy perspective, I'd rather it be only a portion of my team-building. After all, only NFL teams know the makeup of a player's character, his ability to learn the game, and his professionalism at the job. And the NFL gets these things wrong a lot as well.

The strategy heading into this draft was to see how the league valued specific players based on age, experience, and position and bid accordingly. It means I didn't know if I'd wind up with a Studs-And-Duds, Control-the-Draft, a Balanced Approach, or some other variation until I had three to five players on my team.

There's a tendency for teams to underbid early until they get warmed up to the process. There's also a tendency for teams to overreact to a high winning bid early. This draft featured both reactions and there were enough backs drafted early on that I could gauge which premium back to target (Alvin Kamara) and at a reasonable price ($45) for a top-dollar player early on.

After winning Kamara's services, I placed Patrick Mahomes II up for bid, hoping to achieve one of two outcomes after the league would assuredly drive up a premium price for Mahomes: 1) Create a cautious, post-Mahomes bidding environment or 2) Influence subsequent bidders to continue to nominate top players at other positions and create pockets of discount opportunities in between these nominations.

As you can see below, both things happened. The nominations after Mahomes were included Nick Chubb ($47), Stefon Diggs ($49), George Kittle ($35), and Travis Kelce ($35). These GMs paid the premium on these options.

Prior to the Mahomes nomination, Justin Jefferson ($56) and DK Metcalf ($45) were premium purchases after premium money paid for Derrick Henry, Saquon Barkley, Christian McCaffrey, Dalvin Cook, and Jonathan Taylor led to a massive discount on Calvin Ridley ($26). See how there's a crest and a valley with the market?

You're not always going to time them well, but understanding that they exist and how you can work with them is helpful.

There were three teams that managed to time these waves effectively during these first 20 picks. One team got Aaron Jones for $24. You could argue that Jones is in the final year of his deal and the uncertainty over Aaron Rodgers justified a lower price, but $24 for a back who produces at a rate at least $10-$15 higher is a smart bid.

Cam Akers performed well down the stretch, but not at the Jonathan Taylor ($41) level, so nominating him and paying $29 as the winning bid was the smart move.

The third winning bid that came at a discount was my $25 payment for Ezekiel Elliott's services. Elliott will be 26 this summer after a down year due to injuries at offensive line and quarterback. Elliott is a great runner with 2-3 years left if he remains as healthy as he has been during his career, and to get him for $10-$15 less than where he should be valued based on ability and the likelihood of a healthier season for Dallas overall? I'll take the fear-fueled discount.

After seeing that teams were paying a premium for Jefferson, Diggs, and DK Metcalf, and they just finished paying top-dollar for Mahomes, and elite tight ends, I went hard to the hole for Tyreek Hill, knowing my targeted budget for him would be $45-$50 but hoping that a valley of bidding fatigue might help me earn a discount.

I got Hill for $37. Kamara. Elliott. Hill. Not a bad start and two of the three at a discount.

Here are the first 28 picks. My team is The Murder. 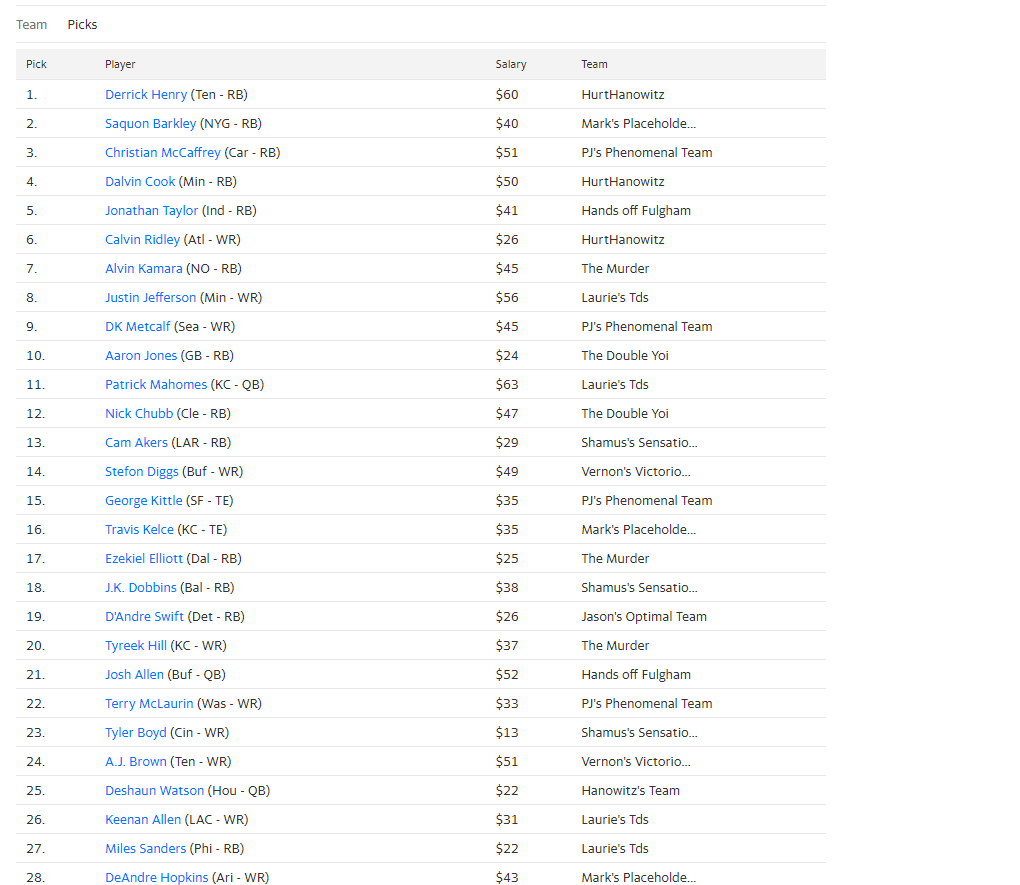 At this point, I still had options with my strategy. I could sit on my remaining funds and try to control the auction at the end. However, I had the advantage of being on a Zoom call with most of the league. After assessing their reactions to winning bids, their conversation, and the number of teams sitting on their funds "to win the draft," I decided to roll with getting as many proven starters in the approximate age range of 26-30 as possible.

I also opted out of 49ers bids until we got into the $1 rounds of the auction because we had a clear 49ers homer in the league and didn't want to have any draft plan revolving around players that a GM might bid higher out of emotional attachment.

My strategic assessment is validated further based on knowing my competition. My buddy Alex paid $45 for CeeDee Lamb. This is one of my favorite players in football today and a must-have option in many of my drafts. I tried to get Keelan Cole for $2-$3 and that didn't work, either. Once I saw Lamb go for $45 and Cole for $4 to GMs who know my work, share my sentiments, and were sitting on capital early on, I knew I couldn't target players I write about regularly unless my views go against the grain of the consensus.

So I nominated players that I would normally want, but know I wouldn't land. Trey Lance was at the top of the list. Sure enough, Alex paid $35.

David Montgomery is in the desired age range for most, but most people value speed from running backs and he lacks it. What he didn't lack down the stretch was production despite a mediocre-to-bad offensive line. He'll also have a massive running threat at quarterback by midseason who will open lanes for him with the option game.

When quicker-than-fast James Robinson went for $12 after speedster Travis Etienne went for $18 and Cooper for $25, I decided to pay up to $20 for Montgomery when a team nominated him and I won his services for $17.

I then timed the wave and age-based pattern of bidding to win Robert Woods for $17 after witnessing an age-uncertainty discount for Aaron Rodgers ($19), Davante Adams ($25), and Julio Jones ($17), an age-related premium paid for Justin Herbert ($50) and JaMarr Chase ($35).

Kamara. Elliott. Montgomery. Hill. Woods. Most of these players have two or three years of starter value left. Woods may not be one of them. Still, the bidding patterns seemed to be clear enough that I could work this to my advantage for a Win-Now team. 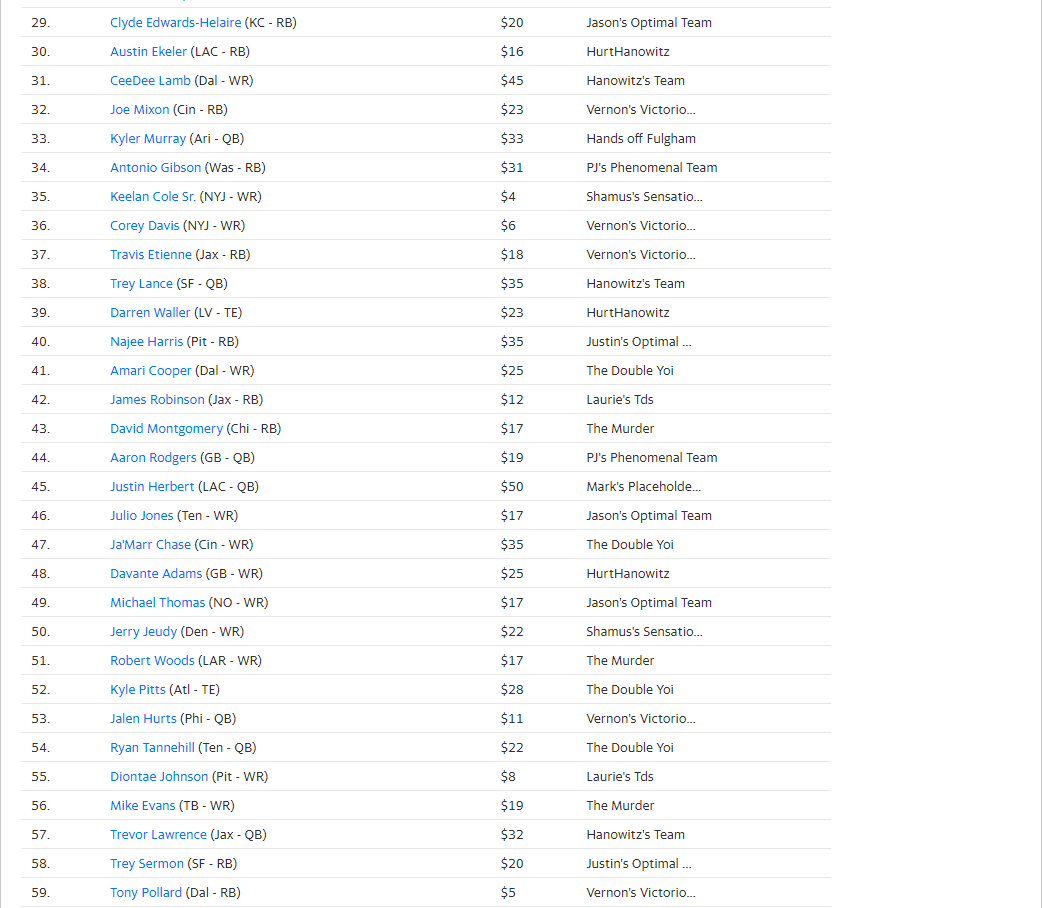 After Woods, Pitts went for a slight discount for the premium I thought he'd command but there was some bidding fatigue or skepticism with Pitts, Jalen Hurts, and Dionte Johnson. When Mike Evans earned a nomination during this period, I was willing to pay $25-$35 based on my earlier discounts and what I paid for Hill. Once again, I got him much cheaper -- $19.

With three strong starting running backs and three excellent receivers for a Win-Now Strategy, I needed a pair of strong quarterbacks. Here's where I would have to pay the premium if I wanted to acquire proven, high-producing talent. Considering the makeup of my team, I decided I was all-in on contending this year and next if my starting lineup stays healthy enough.

That meant bidding enough to win two of Dak Prescott, Lamar Jackson, Russell Wilson, Justin Fields, or Tua Tagovailoa. I greatly preferred the first three, but I'd deal with the last two because of their off-script capabilities and wheels to gain yardage.

I got the 28-year-old Prescott ($31) and the 23-year-old Jackson ($30) for less than the unproven but talented combo of Lance or Lawrence and only $11 more than the total sum paid for Herbert.

Considering that quarterbacks often play well into their mid-thirties, I'm happy with these two as anchors for my team. While Jackson's running has many concerned that he'll only play another five to seven years at a high level, at best, that's long enough for me to focus on replacing receivers, backs, and tight ends through the draft and free agency.

I'd like one or two quarterbacks with potential starter value as depth, but that will have to wait.

Executing the Rest of the Auction

After establishing the tendencies of my league and exploiting it during the first 100 picks, I continued to leverage this strategy with selected picks of aging starters with high ceilings, starters with uncertain environments, talented options who disappointed the market but have the potential to rebound, and selected shots at younger talent I like more than the consensus.

You can see the entire draft list with bids here.

Here are the rest of my picks:

This team earned Yahoo's "Best Draft" title based on projected points. That's what you want when going for a Win Now Strategy.

Hopefully, you saw patterns of bidding that will help you leverage an advantageous strategy in your auctions. Remember, even if you look at specific bids and think, "This wouldn't happen in my drafts," I've found that every auction draft has these moments to some degree--even if the discounts or overpayments aren't as wide in range.

Once you realize this, you can build a contender.